1. Introduction to Carbon and its Compounds

Carbon compounds are present in the food we eat, medicines we take, clothes we wear, domestic and automobile fuels, paint, cosmetics, automobile parts, and other products we use.
We use an infinite number of carbon compounds on a daily basis as it is an inseparable component of human life.

Carbon compounds outnumber all other elements in the periodic table in terms of the number of compounds found in nature and synthetically produced.
There are more than \(5\) million carbon compounds. Its unique properties, such as catenation, tetravalency, and multiple bonding, allow it to combine with itself or other elements such as hydrogen, oxygen, nitrogen, sulphur, and so on to form a large number of compounds. 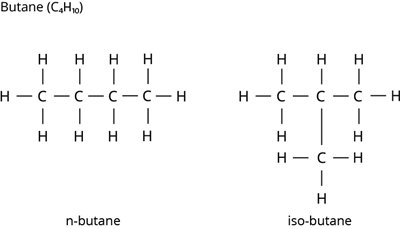 Chain isomerism
8. Organic compounds are volatile in nature.
Volatile organic compounds are organic chemicals containing carbon with a high vapour pressure at room temperature. This high vapour pressure is due to their low boiling point, which allows molecules to evaporate from liquid to gas phase. This property is known as volatility.
9. Organic compounds can be synthesised in a laboratory.
Organic synthesis is the use of chemical reactions to create more complex organic molecules from simpler ones. New molecules are frequently synthesised to study their chemical properties or have intentionally designed molecular behaviour, such as pharmaceuticals or new materials.
Note:
Urea or carbamide (\(CH_4N_2O\)) is widely regarded as the first organic compound synthesised from inorganic chemicals. Friedrich Wohler, a German chemist, created urea artificially in \(1828\) by treating silver cyanate with ammonium chloride.
Exit to the topic
Next theory
Send feedback
Did you find an error?
Send it to us!