As we have discussed previously, evolution occurs as a response to natural changes. How these natural changes which occurred gave rise to various new species of organisms are explained through the theories of evolution as proposed by Lamarck and Darwin. 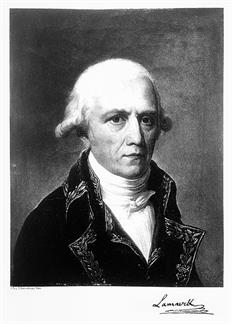 Jean Baptiste Lamarck
He is well known for his theory of evolution. The theory of evolution proposed by Lamarck was published in the book 'Philosophic Zoologique'in the year \(1809\). His theory was popularly known as the 'Theory of inheritance of Acquired Characters" or "Use and Disuse theory" or Lamarckism.
Important!
He coined the terms 'invertebrates' and 'annelida'. Along with Treviranus (\(1802\)), he gave the term biology.
Lamarckism includes four main principles as follows:
1.  Internal vital force:
According to Lamarck, every organism has a vital internal force (a hypothetical force). The size of living organisms and their parts tend to increase in their volume throughout time. This growth in size is due to the organisms' vital internal force.
2.  Effect of environment and new needs:
Our environment is a tremendous influencer. Hence, a change in the environment brings about the initiation of new needs, in the organisms. As discussed in the previous theory, in order to meet up the new needs organisms develop certain adaptive characters, which are morphological or anatomical. Development of these characters leads to changes in the functions also. Such variations are called acquired characters. These adaptive characters of the organisms may be in the form of the development of new parts of the body.
3.  Use and disuse theory:

According to this theory, an organ used constantly develops well and is strengthened. The organs which are not used for an extended period gradually reduces and finally degenerates.
4.  Theory of inheritance of acquired characters:

As discussed above, acquired characters are developed in animals to respond to the change in the environment.
According to Lamarck, as these characters provide better chances of survival for that species, they are transmitted to their offspring by inheritance.

The principles of Lamarckism
But all these principles were criticised due to the lack of proper evidence.
A major criticism was Weismann's germplasm theory.
Reference:
https://commons.wikimedia.org/wiki/File:Lamarck-Darwin.jpg
https://commons.wikimedia.org/wiki/File:Jean_Baptiste_Pierre_Antoine_de_Monet_Lamarck._Photogravure_Wellcome_V0003324.jpg
Previous theory
Exit to the topic
Next theory
Send feedback
Did you find an error?
Send it to us!