We use the same sign convention for lenses as we do for spherical mirrors. We use the same rules for distance signs, except that all measurements are taken from the lens's optical centre. According to the convention, the focal length of a convex lens is positive, while that of a concave lens is negative. For the values of \(u\), \(v\), \(f\), object height h, and image height \(h′\), you must use appropriate signs.
Lens Formula
We have a formula for spherical lenses, just as we do for spherical mirrors. This formula gives the relationship between object distance (\(u\)), image distance (\(v\)) and the focal length (\(f\)). The lens formula is expressed as
The above lens formula is general and applies to any spherical lens in any situation. When putting numerical values for solving problems involving lenses, be careful of the signs of different quantities.
Magnification
The magnification produced by a lens, like that produced by spherical mirrors, is defined as the ratio of the image height to the object height. The letter \(m\) is used to represent magnification. If \(h\) is the height of the object and \(h′\) is the height of the image produced by a lens, then
The object-distance \(u\) and the image-distance \(v\) are also related to the magnification produced by a lens. This relationship is given by 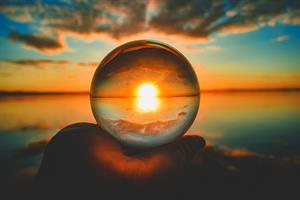 Magnification produced by lens
Reference:
https://www.publicdomainpictures.net/en/view-image.php?image=319273&picture=reflection-time-through-a-lens-ball
Previous theory
Exit to the topic
Next theory
Send feedback
Did you find an error?
Send it to us!