2. The process behind the conductivity of liquids and bulb glows

Earlier, we have used cell for testing solid materials. Now, we replace the cell with a battery to test the conductivity of various liquids. A battery is nothing but a couple of cells.

How the liquids (electrolytes) conduct electricity?

How does a bulb glow when an electric current passes through it?

The filament (made up of tungsten) of the bulb becomes heated to a high temperature due to the heating effect of the current, and it begins to glow. However, if the current is too weak, the filament does not get heated enough, and the bulb does not glow.

Sometimes though the material may conduct electricity, it may not conduct as easily as metals. As a result, the tester's circuit may be completed, but the bulb may not glow due to the weak current. For that, we can use LED (Light Emitting Diode) instead of the electric bulb in the tester. LED can glow even when a weak electric current flows through it. 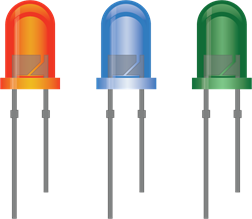 LED - Light Emitting Diode
In the LED (as shown above), there are two wires called "leads". One lead is longer than another. The longer lead is always attached to the positive terminal of the battery, whereas the shorter lead is attached to the negative terminal of the battery.
LED light is available in many colours (red, green, yellow, white, blue, etc.).
Application:
Previous theory
Exit to the topic
Next theory
Send feedback
Did you find an error?
Send it to us!