The way a crow
Shook down on me
The dust of snow
From a hemlock tree
Explanation:
The first stanza of the poem, "Dust of Snow", introduces the only two living characters: the speaker and the crow. The poem, narrated in the first-person point of view, describes a small incident in the speaker's life. The incident might seem trivial; however, it is hardly insignificant. 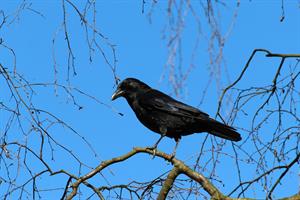 Crow is one of the important characters of the poem
In a nutshell, the first four lines of the poem talk about how a crow settled on a hemlock tree had shaken down some snow dust on the speaker.

From reading the above stanza, it is clear that the poem is set during a winter day. The winter could be seen as a metaphor here, suggesting the speaker's mood. Winter often represents death, sadness, loneliness, or even retrospection in literature. We have colder weather in the winter, occasionally accompanied by snow and frost, no leaves appear on the trees, flowers never blossom, and the amount of daylight during the day is at its smallest.  On the other hand, winter is also seen as a season of perseverance. One has to get through the winter to experience the spring or summer. To quote Shelley, "If a winter comes, can spring be far behind". If one is strong enough to endure and persevere through hard times, one can find happiness and peace eventually. 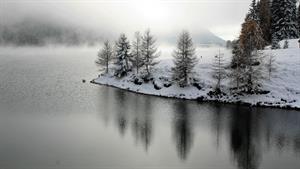 The poem is set during a winter day
Likewise, the words "crow" and "dust" can also be seen as motifs that suggest the theme of death or darkness. Not necessarily evil, but a crow's "appearance in literature and myth is often a symbolic representation of tragedy."* As far as the word "dust" is concerned, it mildly echoes the line from the bible: "for dust you are and to dust you will return.” (Genesis 3:19) In this biblical context, dust means the ashes we turn into once we are dead. According to the Christian doctrine, God created man from the dust of the ground and breathed life into his nostrils, transforming him into a living being.

So, these motifs reveal more than what was said by the poet. They establish the speaker's frame of mind that he was gloomy, and he was probably pondering over darker thoughts such as death. The speaker in his gloomy state
However, the poem takes a positive turn towards the end of the first stanza. The appearance of a "hemlock tree" brings hope; it also encourages the readers to believe that the speaker is coming out of his gloominess. What is crucial here is the speaker's choice of hemlock: a "tree". One should note that there is a plant and a tree in the name of hemlock. The plant is poisonous and harmful, while the tree is edible and has medicinal qualities. Had the hemlock been a plant, the whole poem might have been perceived differently. But Frost (the poet) decided that he should pull his speaker out of gloominess. Hence, he chose the tree with positive qualities as a motif of the poem over the plant with negative ones.

Hemlock trees are large, long-lived conifer trees (conifer trees = the trees whose leaves look like needles). Their antiquity makes them ideal for retrospection and inducing philosophical notions. Having outlived several creatures on the earth, they know better than anyone else how impermanent life is. Life is too short and precious for us to remain sad, worried, and wither away. Hemlock trees¹
Speaking about their habitat, the tress can be found in cool, wet, and dark forests throughout lower Canada, Midwest, and the East Coast. They are shade tolerant and need humidity, but they do not thrive in dry or hot conditions. Hemlocks can also withstand snow and ice better than other conifers, thanks to their flexible branches and feathery needles, which allow snow to settle and branches to bend and bow without breaking. This offers a shelter beneath the surface.