Custard the dragon had big sharp teeth,
And spikes on top of him and scales underneath,
Mouth like a fireplace, chimney for a nose,
And realio, trulio daggers on his toes.
Belinda was as brave as a barrel full of bears,
And Ink and Blink chased lions down the stairs,
Mustard was as brave as a tiger in a rage,
But Custard cried for a nice safe cage.
Explanation:
Dragons are supposed to be very dangerous creatures. Throughout history, dragons are always represented as heinous creatures who swallow people and breathe fire. Dragons are mythical creatures that appear only in folklores and stories from ancient mythology. They are not found daily, making it quite unusual for anyone to have them as a pet. Different cultures have different stories about the evolution and presence of dragons. They are four-legged creatures with huge wings, and they can destroy anyone. The myths also state that they are the bravest of all the creatures that existed. 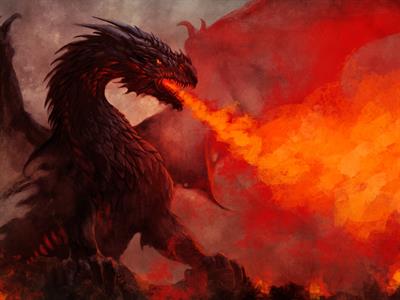 Dragon emitting fire
The poem has quite a contrary opinion and portrayal of a dragon compared to the established ones. But the descriptions given for the dragon remain true to the characteristics and physical attributes of an original one. The poet says that Custard, the dragon, had big sharp teeth. Carnivorous and wild animals who prey on others have fangs for teeth, and they are supposed to be dangerous. The dragon also has spikes on  his body, which are pointed and sharp as they can hurt anyone who brushes by or touches it. The body has scales underneath like that of a fish. The body of the dragon is not a very soft one, and it has been conditioned in such a way that it can withstand harsh conditions. Dragons breathe fire; therefore, the poet compares it to a fireplace that emits fire. When it emits fire, there is also smoke that comes out of its nose. He, therefore, compares its nose with a chimney. He also has sharp dagger-like toes, as they are powerful like a sword.
Belinda is a very brave girl, and the poet compares her bravery to the fact that she is as strong as a barrel full of bears. A bear is a powerful animal and can fight fiercely. Its weight alone can crush people. Belinda is being compared to not just one bear but a barrel full of them. It is a figure of speech as bears cannot be contained in barrels. Lions are supreme creatures, and they prey on most other small animals. Generally, a lion is mightier than a cat or a mouse. But in this case, Ink and Blink can chase such a powerful lion down the stairs, showing their bravery. Mustard, the dog, is compared to a tiger in a rage, as he is also brave. But the dragon, who is supposedly the mightiest of them, and has a physique for that, is the meekest of them all. When everyone is excited about fighting and showing their power, Custard wants to stay inside a safe and comfortable cage. Dragons like to be out in the open, but in the poem, it just yearns for a cage to rest.
Meaning of difficult words:
Reference:
National Council of Educational Research and Training (2006). Beehive. The Tale of Custard the Dragon - Ogden Nash (pp. 129-132). Published at the Publication Division by the Secretary, National Council of Educational Research and Training, Sri Aurobindo Marg, New Delhi.
Previous theory
Exit to the topic
Next theory
Send feedback
Did you find an error?
Send it to us!