2. About the author - Nelson Mandela

Name of the author: Nelson Mandela
Name of the lesson: A Long Walk to Freedom 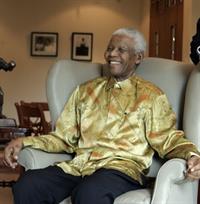 Nelson Rolihlahla Mandela was a South African anti-apartheid revolutionary and political leader who served as the first president of South Africa from \(1994\) to \(1999\). He was the country's first black head of state and the first elected in a fully representative democratic election. His government focused on dismantling the legacy of apartheid by tackling institutionalised racism and fostering racial reconciliation. Ideologically an African nationalist and socialist, he served as the president of the African National Congress (ANC) party from \(1991\) to \(1997\).

Mandela was born into the Thembu royal family in Mvezo, Union of South Africa, on \(18\) July \(1918\), to Gadla Henry Mphakanyiswa Mandela and Nosekeni Fanny. He studied law at the University of Fort Hare and the University of Witwatersrand before working as a lawyer in Johannesburg. There he became involved in anti-colonial and African nationalist politics, joining the ANC in \(1943\) and co-founding its Youth League in \(1944\). After the National Party's white-only government established apartheid, a system of racial segregation that privileged whites, Mandela and the ANC committed themselves to its overthrow. He was repeatedly arrested for seditious activities and was unsuccessfully prosecuted in the \(1956\) Treason Trial. Influenced by Marxism, he secretly joined the banned South African Communist Party (SACP). Although initially committed to non-violent protest, in association with the SACP he co-founded the militant uMkhonto we Sizwe in \(1961\) and led a sabotage campaign against the government. He was arrested and imprisoned in \(1962\), and, following the Rivonia Trial, was sentenced to life imprisonment for conspiring to overthrow the state.

Mandela served \(27\) years in prison, split between Robben Island, Pollsmoor Prison and Victor Verster Prison. Amid growing domestic and international pressure and fears of racial civil war, President F. W. de Klerk released him in \(1990\). Mandela and de Klerk led efforts to negotiate an end to apartheid, which resulted in the \(1994\) multiracial general election in which Mandela led the ANC to victory and became president. Leading a broad coalition government which promulgated a new constitution, Mandela emphasised reconciliation between the country's racial groups and created the Truth and Reconciliation Commission to investigate past human rights abuses.

Mandela was married three times, fathered six children, and had seventeen grandchildren and at least seventeen great-grandchildren. After suffering from a prolonged respiratory infection, Mandela died on \(5\) December \(2013\) at the age of \(95\).

Reference:
Governor-General of Australia, CC BY 3.0 <https://creativecommons.org/licenses/by/3.0>, via Wikimedia Commons
Previous theory
Exit to the topic
Next theory
Send feedback
Did you find an error?
Send it to us!