Max bit his lip nervously. The knocking was repeated.
“What will you do now, Max?” Ausable asked. “If I do not answer the door, they will enter anyway. The door is unlocked. And they will not hesitate to shoot.”
Max’s face was black with anger as he backed swiftly towards the window. He swung a leg over the sill. “Send them away!” he warned. “I will wait on the balcony. Send them away or I’ll shoot and take my chances!”
The knocking at the door became louder and a voice was raised. “Mr Ausable! Mr Ausable!”
Keeping his body twisted so that his gun still covered the fat man and his guest, the man at the window grasped the frame with his free hand to support himself. Then he swung his other leg up and over the window-sill.
The doorknob turned. Swiftly Max pushed with his left hand to free himself from the sill and drop to the balcony. And then, as he dropped, he screamed once, shrilly.
The door opened and a waiter stood there with a tray, a bottle and two glasses. “Here is the drink you ordered for when you returned,” he said, and set the tray on the table, deftly uncorked the bottle, and left the room.
White-faced, Fowler stared after him. “But...” he stammered, “the police...”
“There were no police.” Ausable sighed. “Only Henry, whom I was expecting.”
“But won’t that man out on the balcony...?” Fowler began.
“No,” said Ausable, “he won’t return. You see, my young friend, there is no balcony.”
Explanation:
Max grew tense due to the scenario and bit his lip. The reason behind his behaviour was that if the police came inside the room, he would catch him. Also, his plan of taking the report will not be accomplished. After that, the knocking on the door continued. Ausable then inquired of Max what he intended to do next. After questioning him, Ausable stated that if the door was unlocked and he did not allow him to open it, the police would enter anyhow and would surely fire if they saw him with a gun.

After hearing Ausable's statements, Max was enraged by the circumstances and walked quickly towards the window. He then put his leg over the window sill and told Ausable to send the individuals standing outside the door. He also stated that he would wait on the balcony to see if they were moving or not. Furthermore, he stated that if Ausable did not send them away, he would shoot them and seize the reports.

The knocking on the door became louder as time passed, and someone from outside called for Mr Ausable twice. Max sat on the window sill, looking inside, so his rifle could still be directed at Mr Ausable and Fowler. Max then perched on the window sill with both legs outside, holding the window ledge.

The doorknob slowly moved, and Max assumed that the cops were on their way in, so he leapt from the window sill and fell vertically down the balcony. When he collapsed, he let out a harsh cry. When the door opened, a waiter was standing there with a tray, a bottle of wine, and two glasses. He walked in, kept everything on the table, and claimed it was the bottle Ausable had requested. He carefully removed the cork from the bottle and walked away. 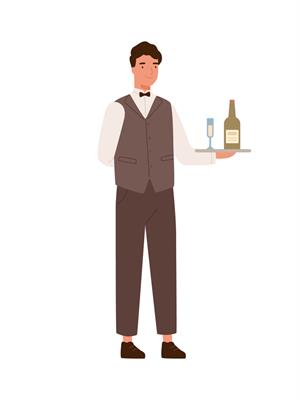 Henry, the waiter
Fowler had no idea what had occurred and mumbled about where the cops were, to which Ausable answered that there were no cops and that he knew it was Henry, the waiter, and that he was simply awaiting him. Then Fowler inquired about the guy outside the window, to which Ausable answered that he would never return since there was no balcony and Max had fallen to the earth from the building's top floor.

Through this story, one can understand that appearance doesn't matter. Whether Ausable is thin or fat doesn't portray his character; his cleverness and handling of the situation showed him as a talented secret agent. His witty plan had made him save his important report from Max. As Ausable knew there was no other balcony in the apartment, he cooked up stories to confuse him. As a result of that confusion, Max lost his life. So the moral of the story is 'appearance can be deceptive'. So, don't judge people simply by their looks.
Meanings of the difficult words:
Reference:
National Council of Educational Research and Training (2007). The Midnight Visitor- Robert Arthur (pp. 14-19). Published at the Publication Division by the Secretary, National Council of Educational Research and Training, Sri Aurobindo Marg, New Delhi.
Previous theory
Exit to the topic
Next theory
Send feedback
Did you find an error?
Send it to us!