The Djinn rolled himself up in his dust-cloak, and took a walk across the Desert, and found the Camel looking at his own reflection in a pool of water.

“My friend,” said the Djinn, “what’s this I hear of your doing no work?”

The Djinn sat down, with his chin in his hand, while the Camel looked at his own reflection in the pool of water.

“You’ve given the Three extra work ever since Monday morning, all on account of your idleness,” said the Djinn. And he went on thinking with his chin in his hand.

“I shouldn’t say that again if I were you,” said the Djinn; “you might say it once too often. I want you to work.”

And the Camel said “Humph!” again; but no sooner had he said it than he saw his back, that he was so proud of, puffing up and puffing up into a great big hump.

Explanation:
The Djinn rolled himself up in his cloak means that the Djinn prepared to leave the place and wrapped himself in his long dress. It is a large loose garment like an overcoat. He got up and walked across the desert to where the camel was staying. The camel was near a pool of water, looking at his own reflection in the water. 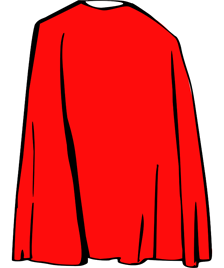 Cloak.
The Djinn asked the camel why did he hear that he was not doing any work. The camel did not reply but continued to look at his reflection.
The Djinn sat down with his chin in his hand as an expression of thinking.
The Djinn continued and said that the camel had made the three animals work extra since Monday morning because he was idle. After saying this, again the Djinn continued thinking, with his chin in his hand. Maybe the Djinn was thinking about how to punish the camel and make him work.
The camel, as usual, replied "Humph" to everything that the Djinn said.
The Djinn told the camel that he wouldn't say the word "Humph" again if he were the camel. This was used as a warning to the camel to stop repeating "Humph" for everything. The Djinn's tone had presumably become serious. The Djinn added that he said "Humph" for everything and that he wanted him to work.
But the camel said "Humph" again. The camel immediately saw that his back was puffing up into a great hump, in the reflection in the water. He had been so proud of his back. But now it looked like a huge hump.
Meanings of difficult words:
Reference:
National Council of Educational Research and Training (2008). How the camel got his hump - Rudyard Kipling (abridged) (pp. 01-06). Published at the Publication Division by the Secretary, National Council of Educational Research and Training, Sri Aurobindo Marg, New Delhi.
Previous theory
Exit to the topic
Next theory
Send feedback
Did you find an error?
Send it to us!