“The doctors agree in ordering me complete rest, an absence of mental excitement, and avoidance of anything in the nature of violent physical exercise,” announced Framton, who laboured under the tolerably widespread delusion that total strangers and chance acquaintances are hungry for the least detail of one’s ailments and infirmities, their cause and cure. “On the matter of diet they are not so much in agreement,” he continued.
“No?” said Mrs Sappleton, in a voice which only replaced a yawn at the last moment. Then she suddenly brightened into alert attention — but not to what Framton was saying.
Explanation:
As Mr Nuttel was disturbed by Mrs Sappleton's talk, he tried explaining his medical condition to her. He said that the doctors had unanimously agreed that he should get complete rest. By "rest", the doctors had meant an absence of both mental and physical excitement and exercise.
The narrator then uses Mr Nuttel to mock people in general. He states that Mr Nuttel, like any human being, was suffering from the delusion that 'total strangers and chance acquaintances are hungry for the tiniest detail of one's medical condition'. That is, here in the context, Mr Nuttel was explaining his health condition to Mrs Sappleton, who was more like a near stranger or mere acquaintance to him. He probably didn’t realise that Mrs Sappleton wouldn’t be interested in learning such minute details about his ailment, causes, or cure.

He is both shy and reserved, and as previously understood, neither is he a talker. So, he might have spoken about his ailment only because he sought a change in the topic. Moreover, he was probably trying to make Mrs Sappleton understand how talking about the dead men could negatively impact his health.

To make the situation lighter, Mr Nuttel tried saying something funny. He said that all the doctors have varied opinions and recommendations regarding diet, though they seemed to have agreed on the importance of "rest".

However, the humour went unnoticed as Mrs Sappleton wasn't paying attention. She merely responded to Mr Nuttel’s “humourous remark” with a single-word-rhetorical question, "No?".  Moreover, as she was considerably bored, her voice replaced a yawn towards the end of the word. 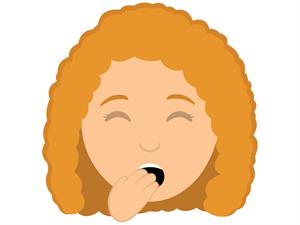 Mrs Sappleton yawned, signifying that she was bored
Then she brightened into alert attention — but it wasn't to Mr Nuttel’s words. Something else had caught her attention.
Meanings of difficult words:
Reference:
National Council of Educational Research and Training (2008). The Open Window – Saki (pp. 55 - 61). Published at the Publication Division by the Secretary, National Council of Educational Research and Training, Sri Aurobindo Marg, New Delhi.
Previous theory
Exit to the topic
Next theory
Send feedback
Did you find an error?
Send it to us!