At night the house seems to be alive,
Lights flicker on and off.
I am often tempted to go to the house,
To just take a look and see what it is really about,
But fear takes over me.
I drive past the house almost every day.
The house seems to be a bit brighter
On this warm summer day in May.
It plays with your mind.
To me I say, it is one of a kind.
Explanation:
The poet sets a spooky tone already in the poem's first stanza. She has revealed that the mysterious place that she is talking about is an enclosed space. But it is, in the second stanza, it is finally revealed that she is talking about a house. This initiates more questions to the reader's mind as to what is so mysterious about the house and why the poet feels the way she does. She leads on with the eerie flow as she says that the house is alive only in the nighttime. The house is personified here, as houses cannot be alive. But the poet uses this personification only to show that the house itself comes as a character in the mystery that is going to be unfolded. The house being alive at night shows that it has something suspicious in it, as she has already mentioned that it is isolated and no one lives in it. In a house that is empty, it is quite unlikely to even have lights turned on once. It is usually empty and dirty. But this house is mysterious as the lights keep flickering on and off without anyone doing so. This line gives a supernatural presence into the scene. 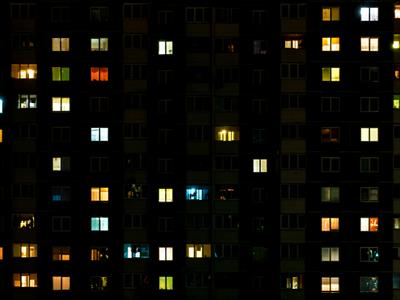 Lights flickering at night
Usually, when there is a rule that denies something, then we always feel the urge to break the rule. For example, if there is a rule that no one is supposed to enter through a particular door but can use all the other doors, we would be curious to know what the mysterious door holds in. We would want to try out the things that no one has ever attempted. Similarly, the poet is so curious to know what causes the lights or why it is spooky. She was so tempted to go inside the house and explore what the fuss was all about. But like any other human being, the poet is overtaken by fear because of the supernatural and spooky connotation to it.
Stanza 3 clears off the interpretation that the poet could be writing from a child's point of view, as she indicates that she would usually drive past the house almost every day. This shows that she lives in the same locality as the house is in and that she would have had various encounters with it. She says that the house seemed to be looking bright on the warm summer day of May as she drove past it. The house looks bright in the day, and at night it evokes spookiness. The poet is not able to move the image of the house from her mind, as she says it plays with her mind. The mystery is what makes it more interesting. She also says that the house is one of its kind, indicating that no other house gives the same feeling and it is definitely different from the normal houses. House looks brighter during daytime
Meaning of difficult words:
Reference:
State Council of Educational Research and Training 2019. Term 1 English Standard - 10. The House on Elm Street - Nadia Bush (pp. 202-204). Published by the Tamil Nadu Textbook and Educational Services Corporation.
Previous theory
Exit to the topic
Next theory
Send feedback
Did you find an error?
Send it to us!