SECTION - II
A pack of wild dogs catching the scent of boar in the wind came to the spot where he had lain. They sniffed the circle that was rich with the smell of the animal. They whined and snarled and dug at the smell as if digging the elusive boar himself out of the ground. Finally, realising that there was no dinner to be found there, they departed, their noses and tails high in the air. And in doing so, they left the hole a little bigger and wider than they had found it.
“And then what happened?” you will ask. “Do other animals come along too?” They do indeed, my child. I told you the hole had a story to tell!
Not long after, the rains came. It poured and poured and only those of us who have seen the monsoons will know what that means. It rained without stopping for three days and three nights and the dry earth soaked up the moisture, as a hungry puppy laps up milk.
Explanation:
A group of wild dogs came to the place where the wild boar had lied down, by following the smell it had left behind. The dogs smelt the area which had the fresh scent of the boar. The dogs made a long crying sound and screamed aggressively at the smell and dug the ground, as they thought the boar was still hiding there. But soon they realized that they did not have the food they expected in the hole. They left the place with pride. In the process of the dogs searching their food, the hole was again widened. The wild dogs did not find their dinner, they left the place!
One might wonder what happened after that. Did any other animal come to the hole? Yes, there is more to the story of the hole.
Soon after, it was time for rains. It rained heavily without a break, for three days and three nights. Just like how a hungry puppy drinks up milk, the dry land drank up all the rainwater and retained the moisture in the surface. 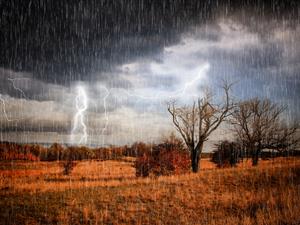 It rained heavily in the parched land!
Meanings of difficult words:
Reference:
State Council of Educational Research and Training (2019). Term-3 English Standard-6. Who Owns the Water (pp 71-80). Published by the Tamil Nadu Textbook and Educational Services Corporation.
Previous theory
Exit to the topic
Next theory
Send feedback
Did you find an error?
Send it to us!