8. Structure of neuron and types

“I think; therefore, I am.”
This is a famous statement made by the French philosopher Descartes. The process of thinking made him realise that he existed. Thinking and reasoning are essential things that give all the advances for humankind. It is done by a special type of tissue called nervous tissue or neural tissue. It also functions to stimulate muscle contraction, create awareness of the environment, and create emotions and memory.
A neuron is a tiny structure found in the brain, spinal cord, and nerves. A single neuron can be up to a metre long and is made up of three parts:

Neuron anatomy
1. Cell body
The cell body is found in the grey matter of the brain’s central nervous system, but a few ganglia are located outside the CNS. It is also called cyton or soma.
Neurons have a star-shaped location on their cell bodies, with different hair-like elements extending from the edge. The cell body carries genetic information and helps maintain the neuron’s structure, also providing energy to drive activity.
Like other cell bodies, a neuron’s soma comprises a nucleus, cytoplasm, and specialised organelles such as mitochondria, golgi bodies, endoplasmic reticulum, ribosomes, and lysosomes. In neurons, the centrosome is absent. It is covered by a membrane that also permits it to interact with its surrounding environment.

Cell body of neuron
The granular bodies found in the cell bodies are known as Nissl's granules.
Important!
Note: The Nissl's granules are irregular aggregates of rough endoplasmic reticulum containing a large number of attached and free ribosomes and polysomes. These granules are most likely responsible for the cell’s protein production. Neuron
2. Axon
A single long, cylindrical conducting fibre extending from a neuron is known as an axon.
Axon terminals are fragile hair-like structures. Each branch ends in a synaptic knob, which is a bulb-like structure. Synaptic vesicles, which contain substances known as neurotransmitters, are found in the synaptic knob. Axons carry nerve impulses from the cell body to a synapse or neuromuscular junction.

Chemical Synapse in axon terminal
3. Dendrites
These are short branched, hair-like fibres of a neuron. Nissl's bodies, neurofibrils and mitochondria are present in dendrites.
Most neurons have multiple dendrites, which extend outward from the cell body and are specialised to receive chemical signals from the axon terminal of other neurons. These signals are converted into tiny electric impulses by dendrites, transporting them inside toward the cell body.

The image depicts the communication between a neuron's axon terminals and the dendrites of another neuron.
Types of neurons
There are four groups of neurons based on their functional existence to the structure. 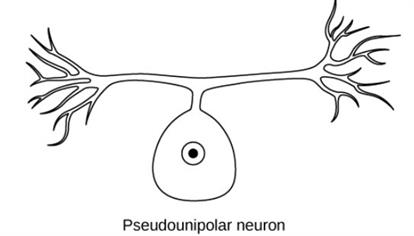