In a scary situation, our heartbeat quicker; the breathing rate will increase, thus supplying our muscles with more oxygen, reducing the blood flow to the digestive system and skin.
All of these responses work together to prepare the animal's body to deal with the event. But this coordination of events is controlled by the hormone called adrenaline which is secreted by adrenaline glands.
Adrenal glands:
The paired structures on the top of the kidneys are known as the adrenal glands. These glands are also known as emergency glands. An outer cortex and an inner medulla make up each adrenal gland.

Adrenal gland
(a) Adrenal cortex:
The embryonic mesoderm gives rise to the adrenal cortex. There are three layers to the adrenal cortex.
1. Zona glomerulosa: It's the area just below the capsule's outer zone. Mineralocorticoids are a hormone secreted by this gland.
2. Zona fasciculata: It is located in the central zone and consists of cells that release glucocorticoids and are arranged in long straight columns.
3. Zona reticularis: It is the inner zone, and it is made up of cells that emit sex corticoids and are grouped in branching cords.

Composition of the adrenal gland and the hormones they release
(b) Adrenal Medulla:
The adrenal medulla develops from the embryo's neuroectoderm. Chromaffin cells make up the medulla of the adrenal gland. Adrenaline (epinephrine) and noradrenaline (norepinephrine) are two hormones secreted by the adrenal medulla. Catecholamines are the general name for these hormones.
Epinephrine and norepinephrine derived from the amino acid called tyrosine. These hormones are termed emergency raising of hairs, sweating, and other things because they are secreted quickly in reaction to stress and during an emergency.
The hormones adrenaline and noradrenaline both raise the heart rate, the strength of cardiac contractions, and the speed of respiration. They also aid in the breakdown of glycogen into glucose, which raises blood glucose levels. These hormones also aid the breakdown of fats and proteins.
Important!
The adrenal glands are sometimes known as "glands of emergency" because of the hormones that release.
The video explaining the location and structure of adrenal glands
Some cortical hormones are  mentioned below.
Mineralocorticoids:
They maintain the sodium and potassium ion ratio, that regulates electrolytic and fluid balance.
One of the most important mineralocorticoids in humans is aldosterone (salt-retaining hormone). Aldosterone helps the kidneys with active sodium reabsorption, passive water reabsorption, and potassium excretion.
Glucocorticoids:
Cortisol is one of the most well-known glucocorticoids. Cortisol's main functions are listed below.
Sexcorticoids or sex hormones:
Both male and female sex hormones are found in sexcorticoids.

The above picture shows the hyposecretion of adrenal cortical hormone - Addison's disease
Cushing’s syndrome:
Cushing’s syndrome is caused by excessive glucocorticoid secretion, which raises blood sugar and blood pressure. Sugar is excreted through the urine in this situation. 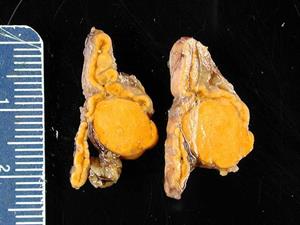 Adrenal gland affected by Conn's syndrome due to hyperaldosteronism
Adrenal Virilism:
In females, excessive sex corticoid secretion causes male features such as a beard, moustache, and a change in voice. Adrenal virilism is the medical term for this illness. Sexual maturity occurs when these hormones are secreted in excess at a young age.
Gynaecomastia:
Gynecomastia is the enlargement of a man’s mammary glands due to excessive estrogen secretion in males. Decreased testosterone may also lead to gynecomastia.
The flowchart of adrenocortical adenoma and it's effects: