Consider a steady current \(I\) flowing through a conductor \(XY\) of resistance \(R\). Let the potential difference \(V\) be applied across the ends of the resistor. 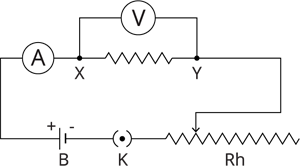 Schematic diagram of an electric circuit
If the charge \(Q\) flows for a time interval of \(t\) seconds, then the amount of electric charge moved from point \(X\) to \(Y\) is given as,
When an electric charge \(Q\) moves with a potential difference \(V\), the amount of electrical work done \(W\) is given by,
\(\)
The energy spent by the source during the work is released in the form of heat. In circuits, all the electrical energy consumed (work done) is converted into heat energy.
Hence, the heat produced is given as,
\(\)
---- (eq. 1)
According to Ohm’s law, the potential difference \(V\) is given as,
Now, substituting the values of \(Q\) and \(V\) in equation (eq. 1), we get
A scientist named 'Joule' has extensively studied this heating effect and formulated laws. Thus, the conversion of electrical energy into heat energy is known as Joule's heating.
Joule’s law of heating states that the heat produced in any resistor is

• Directly proportional to the square of the current passing through the resistor.


• Directly proportional to the resistance of the resistor.


• Directly proportional to the time for which the current is passing through the resistor.
The Joule's heating effect forms the basis for all-electric heating appliances such as iron boxes, water heaters, toasters, etc. Even connecting wires produce a small resistance to the current flow. That is why all electrical gadgets practically become warm when utilised in an electric circuit.
Previous theory
Exit to the topic
Next theory
Send feedback
Did you find an error?
Send it to us!