Have you wondered about the similarities between you and your parents or grandparents? How is it happening?
Molly Sinert was puzzled when the doctors informed her that she shared\(49.96\)% of Isabel’s DNA. She was so puzzled that she couldn’t figure out who Isabel was because she wasn’t a close relative or her daughter. “I’ve never gone into labour, and I don’t have any children,” she explained. But they soon remembered and realised she might be her twin sister’s daughter, whom she had never met.
Twin sisters Molly Sinert and Emily Bushnell were separated at birth in South Korea and were adopted by families in America. Isabel is the daughter of Emily Bushnell. The sisters reunited on March \(29\), \(2021\), and were happier than ever. Molly Sinert and Emily Bushnell with her daughter Isabel
This real-life incident shows the link between humans across generations. Molly Sinert has a characteristic link with Isabel because she is her nephew, shown as a \(49.96\%\) similarity in their DNAs.
This DNA link that connects the Sinert, Bushnell and Isabel is the same link that connects us with our parents, siblings, grandparents and even with the people in our family tree who lived thousands of years ago. Long-lost adopted twins separated at birth reunite after 36 years
Intuitively, the similarities between you and your parents or grandparents are because you obtained those characteristics from them. So, we can say that transferring characteristic traits of  parents to their offspring is similar to that of copying and transferring data from one storage device to another.
Example:
The colour of the eye, the colour of hair, the shape of the nose and the type of earlobe are a few examples of inheritable traits. 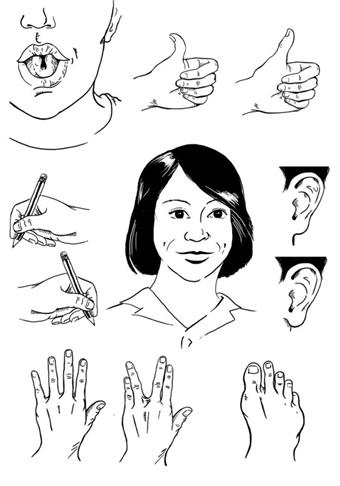 Illustrations showing different inherited traits
The property of organisms to transmit physiological and structural features and the nature of individual development to descendants is called heredity.
Now the question arises. How are these characteristics transferred? How inheritance of traits happened from one generation to another? Was there any substance that carried information from parents to their offspring?
Important!
Gregor Johann Mendel, an Austrian monk, used his experiments to discover the basic principles of heredity. He called the substance, which is responsible for transferring of characteristics as factors. These factors are the basic units of heredity, also called Mendelian units of heredity. Danish botanist,  Wilhelm Johannsen, called these Mendelian units of heredity, Genes.
After the discovery of genes by Gregor Mendel, a new field of biology opened up for research and study.
The branch of biology, which conducts the study of genes, genetic variation, and the heredity of living organisms, is called Genetics.
As mentioned above, characteristic features of an organism are obtained through the replication of genes from its parents. But during this replication, variations in genes will also occur, which gives the organism some distinct traits compared to its parents.
Take your pen and make ten times your signature on a piece of paper. On an overview, each of your signatures looks alike.  If you closely look, you will find that there are variations among each one of the signatures. Similarly, during the transferring of traits from parents to offspring, variations will occur. Genetic variations between the parents and offspring
In the sexual reproduction of animals, including human beings, the number of successful distinct variations among individuals is high. Even in asexual reproduction, there are some amount of variations.
The long-term consequences of the accumulation of variations occur due to the transfer of traits for many generations. This accumulation of variations is the basis of the occurrence of evolution.
Reference:
https://www.flickr.com/photos/121935927@N06/13579172414
https://upload.wikimedia.org/wikipedia/commons/thumb/b/bf/Genetic_variation.png/1024px-Genetic_variation.png
Molly Sinert and Emily Bushnell with her daughter Isabel
Long-lost adopted twins separated at birth reunite after 36 years
Exit to the topic
Next theory
Send feedback
Did you find an error?
Send it to us!