Power station
A power station is also called a power plant or power generating station where electricity is generated in large amounts.
Distribution of current:
The electricity generated at power plants is supplied via overhead and underground cables to all domestic and industrial consumers. For domestic purposes, electricity is distributed via residential electric circuits wired by electricians.

Transmission of power through cables
Main box:
In the first stage of the household circuit, the power supply is provided to the main box from a distribution panel or transformer. 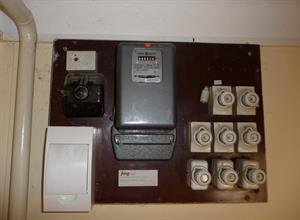 Main box
The vital components of the main box are:
(i) Electric meter:
The meter keeps track of how much electricity is utilised.

Fuse box
Miniature circuit breaker:
A miniature circuit breaker (MCB) is a type of switch that can be operated automatically and manually. When the current exceeds the safety limit, an electromagnet attracts a spring attached to the switch. As a result, the switch is automatically turned off, and the circuit is broken. Thus, the electrical appliances are protected. The switch is turned on again, and the circuit is completed. MCB
Always use an MCB with an ISI mark on it. Nowadays, MCB's are improvised with a built-in mechanism to restart automatically.
Important!
ISI is a standard mark on products assured by the Bureau of Indian Standards in New Delhi.
Distribution of electric current:
Two insulated wires provide electricity from the power plant to the homes. One of these two wires has red insulation and is referred to as the live wire. The other wire, known as the neutral wire, has black insulation. The electricity delivered for domestic purposes in our homes is an alternating current with a \(220\ V\) electric potential.

Schematic representation of domestic electric circuit
The live and neutral wires enter the main box, where the live wire is linked to the main fuse. These live and neutral wires enter the electricity meter, then runs into the main switch. This main switch helps to turn off the power supply whenever needed. Both the live and neutral wires are linked to live wires of two distinct circuits after passing through the main switch.
One of these two circuits has a \(5\ A\) rating and is used to power equipment with lower power ratings, such as tube lights, lamps, and fans. The other circuit has a \(15\ A\) rating and is used for high-power electric equipment, including air conditioners, refrigerators, electric irons, and heaters.
Importance of parallel connection:
It is important to note that all the electric circuits in a house are connected in parallel. The connections are made in parallel so that the removal of one circuit does not impact the other circuits. Another benefit of connecting circuits in parallel is that each electrical appliance receives the same amount of voltage.