When a DNA gene is destroyed or altered so that the genetic message carried by that gene is altered, it is called a mutation. These alterations in the DNA of humans cause several conditions.
Example:
Colour-blindness
The mutation is a sex-linked hereditary condition that limits a person's ability to perceive and recognise specific colours. The \(X\) chromosome contains two genes that create red and green light-sensitive proteins. Mutations in these genes can cause colour blindness.
After noting phenotypic changes in the evening primrose plant, Oenothera lamarckiana, Dutch botanist Hugo De Vries coined the word 'mutation' in \(1901\).
A mutation changes an organism's genetic material (DNA) that can pass down through generations.
Types of mutation
Chromosome mutations and gene mutations are the two most common types of mutations.
Chromosomal mutation
The term "chromosomal mutation" refers to a sudden change in the structure or number of chromosomes.
Chromosomal mutation could lead to:
i) Changes in chromosomal structure
Errors in cell division are the most common cause of structural alterations in the chromosomes. Deletion, duplication, inversion, and translocation in chromosomes result in changes in the number and arrangement of genes.
(ii) Chromosome number changes
It involves the addition or deletion of chromosomes in a cell which is referred to as ploidy.
Types of ploidy
Euploidy and aneuploidy are the two forms of ploidy.
(i) Euploidy
Euploidy is a condition in which an individual has more than the usual amount of diploid (\(2n\)) chromosomes. Left to right: Euploidy - diploid and polyploid banana, diploid and triploid oyster
(ii) Aneuploidy
The loss or addition of one or more chromosomes in a set is known as aneuploidy.
There are three types of it.
Important!
Monosomy (\(2n-1\)), trisomy (\(2n+1\)), and nullisomy  (\(2n-2\)) are the three types of chromosomes.
Down's syndrome
Down's syndrome is one of the most well-known aneuploid conditions in humans.
Discovery
Langdon Down, a doctor, was the first to diagnose Down's syndrome in \(1866\). It is a hereditary disorder in which chromosome \(21\) has an extra copy (Trisomy \(21\)). 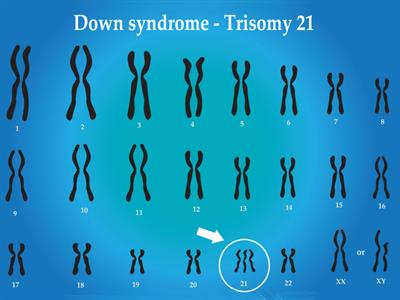 Aneuploidy: Down syndrome karyotype
Symptoms
Mental retardation, delayed development, behavioural issues, weak muscular tone, visual and hearing impairment are just a few of the conditions present in these children.
Gene or point mutation
A gene mutation occurs when the nucleotide sequence of a gene changes. A single or several nitrogenous bases are substituted, deleted, inserted, or inverted in this mutation. A gene mutation causes an organism's abnormal protein formation.
Previous theory
Exit to the topic
Next theory
Send feedback
Did you find an error?
Send it to us!