At some point, both rates will be equal. From this point onward, the concentrations of the reactants and products will not change with time. This is referred to as the 'Equilibrium state'.

Let us study how calcium carbonate decomposes into lime and carbon dioxide. It is a reversible process. The speed of each reaction is determined by the rate at which the reactant disappears. The reaction reaches a chemical equilibrium if it is carried out in a closed vessel.
The rate of decomposition of \(CaCO_3=\)The rate of combination of \(CaO\) and \(CO_2\)

Physical as well as chemical changes can reach equilibrium. Water vapour is formed when water in a closed vessel evaporates. No water vapour escapes because the process is carried out in a closed vessel. As a result, it raises the container's vapour pressure. At some time, the water vapour condenses back into liquid water, and the process reaches equilibrium when the rate of condensation equals the rate of vapourisation. 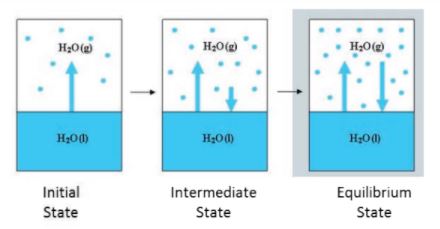 State of physical equilibrium
Characteristics of Equilibrium:
Did you know?
In a pop bottle, dissolved carbon dioxide is contained in aerated carbonated drinks (Soda). When the bottle is closed, the dissolved carbon dioxide (in the form of carbonic acid) and gaseous \(CO_2\) are in equilibrium. When you open the bottle, the gaseous form of \(CO_2\) escapes. As a result, the dissolved \(CO_2\) begins to be undissolved back to the gas phase, trying to restore the gas lost when the bottle was opened. That is why, if you keep it open for a long time, it will go 'flat'. All the \(CO_2\) will be gone, blown away in the air.
Previous theory
Exit to the topic
Next theory
Send feedback
Did you find an error?
Send it to us!