3. Speed and refraction of light

In the early \(17th\) (\(1564‒1642\)), the Italian scientist Galileo Galilei tried to measure the speed of light.
Ole Roemer, a Danish astronomer, calculated the speed of light for the first time in \(1665\) by observing one of Jupiter's twelve moons. He calculated that the speed of light is around \(220,000\) kilometres per second.
Armand Fizeau made the first land-based estimate in \(1849\). The speed of light in a vacuum is now estimated to be nearly \(300,000\) kilometres per second.
Do some organisms make their own light?
Yes, some organisms can make their own light. This ability is called bioluminescence. organisms that live in the dark sea habitat such as worms, fish, squid, starfish, and others glow or produce flashlight to scare off the predator.
Refraction of light at the air-water interface:
What is refraction?
The bending of light rays when they pass obliquely from one medium to another medium is called the refraction of light.
This can be understood better by considering the following activity.
Place a straight pencil at a \(45°\) angle in a tank of water or a beaker of water and observe it from one side and above.
What do you think of the pencil now? 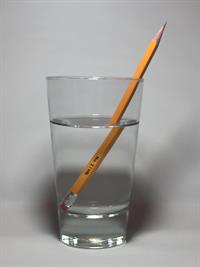 Pencil placed in a transparent glass
At the water's surface, the pencil appears to be bent. When light rays travel from one transparent medium to another with different optical densities, they deviate from their original path. The change in velocity of light in different mediums causes this deviation (change in direction) in the path of light. The nature of the medium in which light travels determines its velocity. The velocity of light is more in a rarer medium (low optical density) than in a denser medium (high optical density).
Reference:
https://pixabay.com/photos/pencil-bent-pencil-pencil-in-water-2403662/
Previous theory
Exit to the topic
Next theory
Send feedback
Did you find an error?
Send it to us!