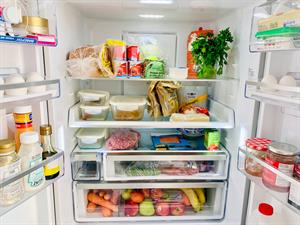 Storing fruits and vegetables in the refrigerator
Important!
Bananas are stored best at room temperature. When stored in a refrigerator, the enzyme ethylene (responsible for ripening) becomes inactive. Also, the enzyme polyphenol oxidase (responsible for browning and cell damage) becomes active, which cause the change of skin colour from yellow to dark brown.
E) Freezing
Freezing is a widely used method of food preservation. The process involves storing the food at temperatures below \(0\)°\(C\) where microorganisms cannot grow. At this temperature, chemical and metabolic reactions are also reduced.
Most perishable foods can be preserved for several months if the temperature is brought down quickly (called quick freezing) and the food held at these temperatures. 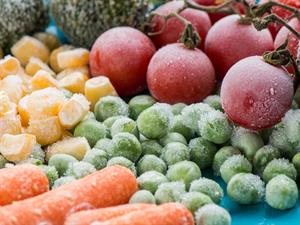 Frozen vegetables
F) Freeze-drying
In the process, the food is frozen, and water or moisture from the food is removed under vacuum. The food in the method is preserved in the natural state without any loss of flavour or texture. Freeze drying the fruits
Example:
Green peas, prawns, and potato can be preserved by freeze-drying.
G) Pasteurization
Pasteurization is a process where there is heat treatment of liquid food products.
It is the method that employs temperature below \(100\)°\(C\) to preserve food. The pasteurization process was named after Louis Pasteur. He discovered that the spoilage organisms could be inactivated in wine by applying heat at temperatures below the boiling point of wine.

The pasteurization process was later applied to milk and remained the most important operation in the processing of milk. Pasteurization is employed to preserve milk and beverages (beer, fruit juices and aerated drinks).

The process involves boiling of milk to a temperature for about \(63\)°\(C\) for about \(30\) minutes, followed by sudden cooling to about \(10\)°\(C\) or lower. This method destroys the microbes present in the milk.

Pasteurization of milk
Important!
Alternatively, when using higher temperatures, the milk is heated for \(72\)°\(C\) for about \(15\) seconds.
H) Canning
This method is employed for most vegetables, fruits, dairy products, fruit juices, ready-to-eat foods, and meat. The food products are processed, stored in clean, steamed airtight containers (cans) under pressure and then sealed. 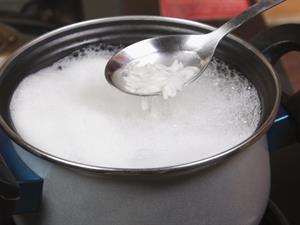 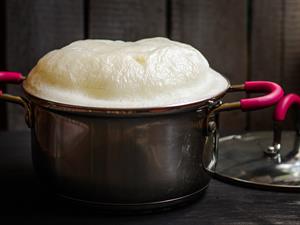 Boiling milk
Reference:
https://commons.wikimedia.org/wiki/File:Simple_Pasteurization.png
Previous theory
Exit to the topic
Next theory
Send feedback
Did you find an error?
Send it to us!