Chikungunya is a vector-borne disease, and the virus is a mosquito-transmitted single-stranded RNA virus (Alphavirus). The disease originated in Africa and has been spread across the globe.  It is causing many epidemics that have infected millions of people in Asia, the Indian subcontinent, Europe, the Americas, and the Pacific Islands.
Causative organism: Chikungunya virus (CHIKV)
Vector: Aedes aegypti mosquito (A yellow fever mosquito, also responsible for Dengue fever and Zika fever). Chikungunya, caused by single-stranded RNA viruses, is transmitted in humans by the bite of infected Aedes aegypti mosquito during the day. 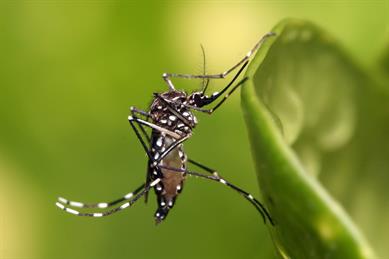 Aedes aegypti mosquito
Incubation period: The incubation period of the virus is\(2\) to \(12\) days.
Symptoms: Chikungunya disease causes common symptoms such as
Treatment: Paracetamol is given to relieve pain and reduce fever. Symptoms of chikungunya
Dengue
Dengue virus causes Dengue fever and Dengue haemorrhagic fever. Dengue is a vector-borne disease transmitted from one human to another through vector mosquitoes. It is also called as breakbone fever. The name break bone fever is because of the contortions caused due to intense joint and muscle pain. Dengue haemorrhagic fever is a more severe form of the disease, and it can be life-threatening or fatal.
Causative organism: Dengue virus (DENV)
It is a single positive-stranded RNA virus.
Vector: Aedes aegypti mosquito
How it spreads: Dengue is transmitted by infected Aedes aegypti mosquito. If a mosquito has a blood meal from an infected person, it is called an infected mosquito.
Incubation period: The incubation period of the dengue virus is generally\(5\) to \(6\) days.
Symptoms: Symptoms of dengue fever
Treatment:Paracetamol will be prescribed to reduce fever and body ache. Complete rest is needed, and also increased intake of fluid is essential.
Herbal facts on Dengue Treatment (Source:AYUSH)
An extraction of tender leaves of papaya and herbal drink Nilavembu Kudineer is given to dengue patients. It is known to increase the blood platelet count.
Reference:
https://en.wikipedia.org/wiki/Aedes_aegypti#/media/File:Aedes_aegypti.jpg
https://commons.wikimedia.org/wiki/File:Dengue_fever_symptoms_pt.svg#/media/File:Dengue_fever_symptoms.svg
Previous theory
Exit to the topic
Next theory
Send feedback
Did you find an error?
Send it to us!