1. The Vedic age and the Aryans.

The Aryan Invasion:
SAPTASINDHU: The area acquired its name from the seven rivers that are flowing in that plains. Jhelum, Ravi, Beas, Sutlej, Indus, Saraswathi and Chenab drains the plains hence the name “Saptasindhu or the Land of Seven Rivers”. (This place is located in modern-day Punjab). SLASH AND BURN AGRICULTURE: This method involves the felling and burning trees of a particular area, where the burned ashes are used as natural fertilisers. The people started cultivation in other areas and allowed the land for self–reclamation.
Sources for the Study of Vedic Age: 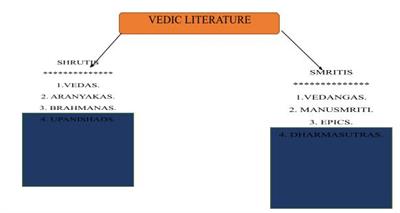 The Shrutis (acquiring knowledge through hearing):
The Shrutis are considered the most sacred of the literature of the Vedic age, where the knowledge has been transferred orally from mentor to his protégé.
1.Vedas
The word Veda is derived from the root word “Vid” meaning “to know or superior Knowledge”. It contains four Vedas, namely, The Rig Vedic text
2. Aranyakas
These are part of Brahmans and are present in the final parts of the texts. Aranyakas are also known as “Forest books”.
3. Brahmanas
These are literary sources that speak about the sacrifices and prayers. Tandyamaha Brahmana is considered to be the oldest among the Brahmanas.
VRYTYASOMA: This is a ceremonial feature mentioned in the Brahmanas by which the non- Aryan people are converted into Aryans.
4. Upanishads
Upanishad means “to sit near someone”. These are philosophical texts that deal with the soul of the human, and contain 108 texts; among these, the “Chandogya and Brihadarnayaka are the oldest ones”.
It is also known as Vedangas (end of Vedas) as it denotes the final phase of the early Vedic period.
SATYAMEVA JAYATE: This phrase found in India’s national emblem has been derived from “Mundaka Upanishad”.
The Smritis: (acquiring knowledge through written texts).
The Period in which the Smritis wrote is considered the period that witnessed the art of documenting various literary sources. It also explains the rules that are to be followed by the Vedic people.
1.Vedangas
Vedangas are philosophies dealing with daily life.They contain six philosophies namely,
2. Manusmriti
These texts speak about the laws of the land that laid procedures that are to be followed while dealing with various problems, considered the oldest written text on laws. It was written by a sage named “Manu”.
3. Epics
The Smritis witnessed the rise of two great epics of Indian literature, namely, Ancient Ramayana text
Important!
Ramayana – Written by Maharishi Valmiki around \(5 BC\).
Mahabaratha – Written by Maharishi Vyasa around \(70 BC – 4 AD\).
4. Dharmasutras
The Dharmasutras deals with the laws of the society in order to establish Dharma or Truth. The oldest known Dharmasutra is Manusmriti.
Archaeological remains
Various Archaeological sources like Iron tools and potteries are found in areas of the Sapthasindhu regions of Punjab, where the Aryans colonised themselves and later, many implements are also found in Indo- Gangetic regions of Rajasthan and Uttar Pradesh.
Reference:
The Rig Vedic text - bodom / Shutterstock.com
Reference:
Ancient Ramayana text - steve estvanik / Shutterstock.com
Exit to the topic
Next theory
Send feedback
Did you find an error?
Send it to us!