Earthquake:
When the Earth's surface shakes or vibrates, it is called an earthquake. This happens most frequently around fault lines or plate borders.
Earthquakes can strike without notice and cause significant harm if they impact populated areas.
Effects:
An earthquake has dreadful and disastrous consequences. Many structures, including hospitals, schools, and other institutions, have been destroyed as a result of it.
Many people are killed or injured. Many people lose both their money and their possessions. It has an impact on people's mental and emotional wellness.
Some environmental impacts are surface faulting, tectonic uplift and subsidence, tsunamis, soil liquefaction, ground resonance, landslides, and ground failure, which are either directly linked to a quake source or produced by ground shaking. Earthquake
Tsunami:
"A sequence of waves produced by the passage of a large amount of water in a water body, generally an ocean or a big lake," according to the tsunami definition.

A Tsunami is a type of earthquake that occurs in the water.
The word "tsunami" comes from the Japanese word "soo-NAH-mee." In Japanese, a tsunami is referred to as a "harbour wave". Because there is no 'T' in the Japanese tsunami's effects on a coastline might range from minor to catastrophic.
Factors Causes Tsunamis:
Earthquakes, volcanic eruptions, and other underwater events like detonations, landslides, glacier calvings, meteorite strikes, and other man-made disruptions above or below water can all generate tsunamis.
Effects:
The earthquake and tsunami effects are influenced by the characteristics of the large earthquake that caused the flood, its location from its origin point, its size (scale), and, finally, the arrangement of the water depth (that is, the water level in oceans) along the shore line that the tsunami is reaching.
Small tsunamis occur on a daily basis as a result of minor earthquakes and other events, and they are non-destructive and unnoticeable without specialised equipment.
When they hit the coast, they are frequently too far away from land or too little to have any effect. When a minor tsunami hits the beach, it is often misinterpreted as a powerful and destructive force. Tsunami
Flood:
Flooding is the result of sudden water that flows onto normally dry land.
In the United States, flooding seems to be the most frequent natural disaster. Accidents or death can result from refusing to evacuate flooded streets or entering floodwaters.
Floods it's causes:
1. Rainfall, snow melting, powerful storms, dams, and other water system overflow are all potential causes.
2. Quickly or swiftly develop. Rapid floods can occur abruptly or without caution.
3. Cause power failures, traffic delays, building damage, and landslides.
Effects:
Flooding has several major consequences, including loss of life and damage to buildings and other facilities such as bridges, sewer systems, motorways, and canals. Floods regularly disrupt electricity transmission and, in certain cases, power generation, resulting in a cascade of negative consequences. 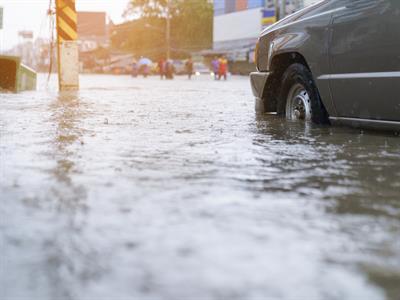 Flood
Cyclone:
In the Northern Hemisphere, a cyclone is a system of winds revolving counterclockwise around a low pressure centre. Clouds and precipitation form as the spinning air rises and cools.
Tropical cyclones and medium latitude (mid-latitude) cyclones are the two types of cyclones.
Effects:
Loss of life and property: The direct consequences of floods include loss of life, property damage, crop devastation, animal loss, infrastructure failure, and worsening of health due to waterborne infections. 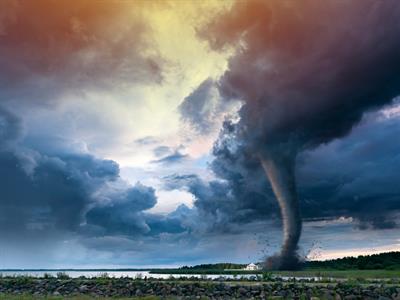 Cyclone
Reference:
Frans Delian / Shutterstock
Previous theory
Exit to the topic
Next theory
Send feedback
Did you find an error?
Send it to us!