Evolution of Indian Indirect Tax Structure:
Lets read about a short history on how the taxation system emerged in India. In the ancient period, Kautilya's Arthshastra, explains that the taxes are levied and collected in both cash and kind. Taxation system kept on evolving in India. Another landmark event was the introduction of VAT. Vat was first introduced in the Indian State of Haryana in \(2003 \)and after that in 24 States/UTs.

The next major reform in the Indirect tax system is the GST(Goods and services tax)
Goods and Services Tax is the most significant indirect tax reform since independence that provides a uniform and more straightforward way of indirect taxation in India.  This will replace a number of other taxes like Service Tax, VAT, Excise tax, Entry tax, purchase tax etc.  It is a single tax on the supply of Goods and Services in the entire product cycle, i.e. from manufacturer to the consumer. GST tax regime has been finally implemented from 1st July 2017 across India
ONE TAX, ONE MARKET AND ONE NATION is the main aim of the GST act. Goods and services tax is collected at the point of consumption rather than the point of manufacturing or origin, so it is called as destination-based tax.
GST is divided into the following tax slabs: 0%, 5%, 12%, 18% and 28%. What taxes at state and centre level has been incorporated into the GST?
At the State level :
At the central level 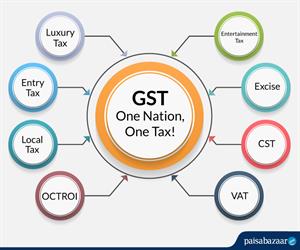 Things exempted from GST:
Taxes on petroleum products(petrol, diesel), Alcoholic drinks, electricity are separately collected by the State government, and all the necessities of life like vegetables and food grains are exempted from the GST.
Example:
If you get a bill for the products you buy, you will find the following information:
Value of the Product = Rs.100
SGST 9% = Rs.9
CGST 9% = Rs.9
Total = Rs.118
In the bill, the GST is 18%, and it is divided equally as 9% for the Central and State Governments. Therefore, Rs 9 will go to Tamil Nadu Government, and another Rs 9 will go to the Central government.
Example:
If a seller in Tamil Nadu sells a commodity to a buyer in other states (for example Kerala), it is called inter-state trade. In the case of inter-state trade, the bill will be as given below:
Value of the Product = Rs.100
IGST 18 % = Rs.18
Total = Rs.118
Rs 18 will go to the Central government. Central government will take Rs 9 and send another Rs 9 to Karnataka government.
This is a brief explanation about the GST tax regime and follow newspapers for more recent information.
Reference:
https://www.falconebiz.com/blogs/types-of-gst---what-are-sgst-cgst--igst.html
https://www.gotechcraft.com/taxation/taxes-subsumed-under-gst/
https://www.paisabazaar.com/tax/gst-bill/
Previous theory
Exit to the topic
Next theory
Send feedback
Did you find an error?
Send it to us!