8. The Subsidiary Alliance of British

The Road to Complete subordination
Having won numerous wars, the British thought of consolidating the Empire of the Company by bringing the rulers of the native powers under its umbrella. The ruthless generals of the British supported this idea of unified expansionary policy.
SUBSIDIARY ALLIANCE: This term was first uttered by the French governor Dupleix, where the British later introduced a policy under this name.
The Idea of Subsidiary Alliance:
Lord Wellesley
Provisions of the Subsidiary Alliance: 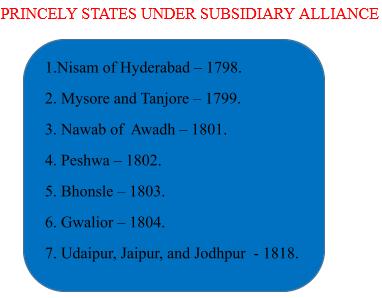 This System of Subsidiary Alliance was seen as a declaration of subjugation by the Indian powers, who lost the entire control of their state, including the contact of foreign powers and their nearby rulers.
The British consolidation came full circle with the policy of the Subsidiary Alliance,by which they established their permanent empire in India.
Reference:
The Stationed British troops - Everett Collection / Shutterstock.com
Previous theory
Exit to the topic
Next theory
Send feedback
Did you find an error?
Send it to us!