Urbanisation is defined as the process through which cities or towns grow, and a higher and higher number of the population comes to live in the urban area. (or)
Urbanisation refers to the process in which there is an increase in the proportion of the population living in towns and cities.
Urbanisation is an integral part of economic development. As the economy grows, there is a rise in the per capita income and the demand for non-farm goods in the economy. These goods are not heavily land-dependent and use more of other factors of production, especially labour and capital. They are cheaper if produced in the urban sector of the economy since urban settlements enjoy economies of agglomeration in manufacturing, services and provision of infrastructure. 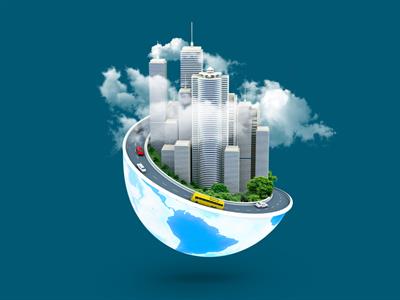 Economic growth influences the rate of urbanisation, while urbanisation in turn affects the rate at which the economy grows. As the country urbanises, the share of national income that originates in the urban sector also increases.
Causes of Urbanisation
Urbanisation is often discussed in reference to countries that are currently experiencing industrialization and urbanisation. But all developed and industrialised nations have experienced urbanisation at some point in their history. Moreover, urbanisation is increasing globally. Present-day urbanisation includes changes in demographics, land cover, economic processes and characteristics of geographic area.
Today, the UK is a mostly urban society, with 90 per cent of the population living in towns or cities.
In 2007, for the first time in history, the global urban population exceeded the global rural population, and the world population has remained predominantly urban thereafter. (World Urbanisation Prospects, 2014 Revision, Highlights).
Exit to the topic
Next theory
Send feedback
Did you find an error?
Send it to us!