Vellore Fort – The Symbol of Revolt:
After the end of the Anglo-Mysore war, the entire family of Tipu Sultan and his confidants were captured and kept in the Vellore fort by the British. The downfall of the Mighty Indian ruler also forced the Palayakkarars and the chieftains to change their side and work for the British army, which was trooped in the Vellore Fort. 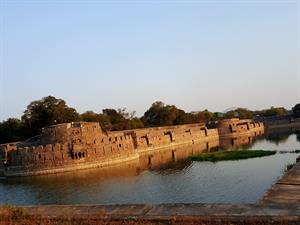 The Vellore fort
William Cavendish Bentick, who became the governor of Madras in 1803, brought some regulations to maintain discipline in the army, which was implemented by his commander-in-chief Sir John Cradock, that deeply hurt the sentiments of native people.
Causes that led to the Revolt:
1. The British's autocratic rules and regulations, including new uniforms and weapons, baffled the native people.
2. The native sepoys who joined the British forces were asked to remove their moustache and trim their beard, which was considered inferior by the native sepoys.
3. Later, they slowly forced them to erase their religious marks, which made the sepoys think that they were being Christianised, which raged anger among the chaste native people.
4. Racial prejudice in the army made the native sepoys feel inferior to their British counterparts.
AGNEW’S TURBAN – THE TRIGGERING POINT

The Revolt and its Suppression:
1. The British's anarchic rules and brutal treatment angered the sepoys who were ready to attack the British contingent and were awaiting an opportunity.The beleaguered family of Tipu Sultan allied with the native forces and planned for an attack. Tipu Sultan
2. The attack took the English army by surprise as it was carried out during midnight while the forces were asleep. Colonel Fancourt, the leader of the pack, was their first victim, and hundreds of sepoys were killed during this attack.
3. To uphold the symbol of victory, the rebels brought down the flag of the company and hoisted the flag of Tipu Sultan and declared the second son of Tipu as their king.
4. Sir Rollo Gillespie led the company forces to avenge the previous attack by taking on the Vellore Fort. The rebels and the rebellion were crushed in a single day, which ended a great uprising.
5. Even though the revolt was crushed within a single day, the courage and character shown by the fighters was nothing short of greatness which sent a clear message to the British that the seeds of their downfall have been sown.
First war of Independence: Many historians including notable leader like V.D. Savarkar described this revolt as the precursor of the Independence struggle and called the Vellore revolt the First war of Independence.
REASONS FOR THE FAILURE OF REVOLT

The aftermath of the Revolt:
The revolt, which was considered as the first sign of loss for the company, made them induce several changes to post the suppression like,
Previous theory
Exit to the topic
Next theory
Send feedback
Did you find an error?
Send it to us!