3. The Urban Structures of the British

The Urban Area:
After the Europeans' advent and capture of the Indian markets, the native economy highly dependent on “agriculture” slowly met its end as the cultivators were forced to grow commercial crops comparatively higher than the staple crops.
Most of the people of agricultural areas left the place and took work under the British factories and other commercial establishments for their sustenance.
Urban Area: It has a dense population where almost \(75\% \) of its people are engaged in works other than the primary sector (agriculture).
The Urban area was a brainchild of the British commercial policies that changed the structure of the Indian economy in the \(18^{th}\) century.
The Urban centres of various British structures are discussed below. 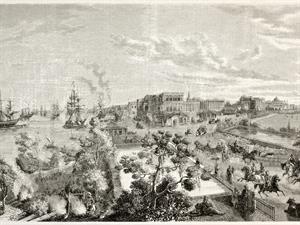 Calcutta Port
The British constructed three important port cities in Bombay, Chennai, and Calcutta, which aided the British in their commercial exploits.
Fort St. George: This fort in Chennai was considered as the first permanent fort of the British in India, although the trade began much earlier from Surat, which is located on the North-West Coast.
The Bombay port emerged in the early \(19^{th}\) century and served as the great centre of trade from the Western coast of India.
Even though there were two port cities, the Port city of Calcutta was considered as the seat of the Governor-general and the headquarters of the army and navy at that time. Fort William is built in Calcutta.
2. Hill Stations:
These are believed to be the Unique setup of the British Urban centres. Coming from an area with mild summer and cold temperate climatic conditions, the British found it tough to acclimatise to the heat of the Indian subcontinent.
They created a new habit of staying in hill stations during the summer and returning to their places during the winter. Hill stations thus became summer heaven for the British.
Hill stations such as Srinagar, Mussoorie, Badrinath and Kedarnath are sparsely populated, and some of them are only visited for religious purposes.
Capital Shift: The British invented the habit of creating two capitals for the summer and winter. All the administrative systems were shifted according to the climate.  For example, Darjeeling served as the Summer capital and Calcutta as the Winter capital.
The hill stations are developed in both North and South India, Shimla and Nainital in the north and Kodaikanal and Ootacamund (modern-day Ooty) also served as summer capitals of the British.
Sanatorium: These are places where rest and medical treatments are provided for the British military troops established in hill stations.
3. Cantonments:
These are urban structures established by the British which were specially dedicated for the military troops who resided there. These structures are otherwise called “Permanent Army Encampments”.
These structures are entirely new to India as they didn’t exist before the advent of the British. Most British forces were kept ready to defend their territories in the Cantonments.
Ahmedabad, Kanpur, Delhi, Pune and Meerut were some of the notable Cantonments established by the British in India.
4. Railway Towns: Railway Towns
Towns connected by the railway lines came to be known as the Railway towns or Railway colonies where people working in British railways resided.
Jamalpur: The first Railway towns established in Jamalpur, Bihar in \(1862\). It served as the model town for the entire country.
These railway towns enabled the transportation of goods from one part of the country to the other part, connected by the railways.
Reference:
Railway Towns: beibaoke / Shutterstock.com
Previous theory
Exit to the topic
Next theory
Send feedback
Did you find an error?
Send it to us!