8. Life of the Iron age people

Livelihoods of the people
The Megalithic people applied their knowledge by earning their livelihood, which was not seen in the past periods. They settled near rivers and tanks, which helped them acquire water used for their sustenance and Irrigational purposes. Megalithic site
The people cultivated various crops like Millets and rice and domesticated animals like sheep, cows etc., for their irrigation and consumption purposes. Adhichanallur in Thoothukudi and Porunthal in Palani are some of the Megalithic sites where the cultivation of rice was found.
Administration during Iron Age
During the Iron age, many communities of people settled in various places that include 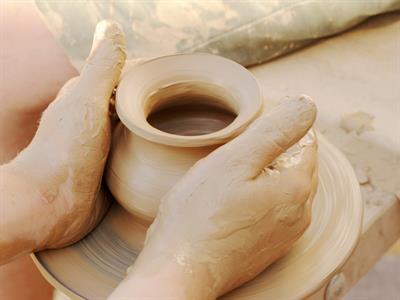 Ancient Pot making
These people belonging to various groups or communities were governed by their people, who were elected as heads of the tribe. The wars and invasions began during this period. The stealing of cows leads to wars during the Iron age.
Potteries
The Iron age witnessed the advancement in potteries. They mostly used
Black and Redware. (Black inside and Red outside).
Black pots
Red pots
Pots in these periods are mainly used for cooking and storage purposes.
Tools of this Period An Iron Age Dagger
Previous theory
Exit to the topic
Next exercise
Send feedback
Did you find an error?
Send it to us!