A Brief History of Money:
For centuries, money played a crucial part in people's everyday lives; without money, an individual will find it very tough to lead a life. Human beings of the world can feel the omnipresence of money. The following paragraphs discuss the history and the evolution of money through historical accounts and incidences.
Mesopotamia: The written records found in the \(3^{rd}\) century BCE in Mesopotamia was the first record of the presence of money. The Mesopotamian civilisation also had a sound knowledge regarding financial structure, as they used silver as a standard value.
The Kingdom of Lydia:
The ancient Lydian Kingdom was a small kingdom located in Modern-day Turkey, between the Mediterranean and the Middle East, one of the most-busiest trade and commerce routes of the travellers. 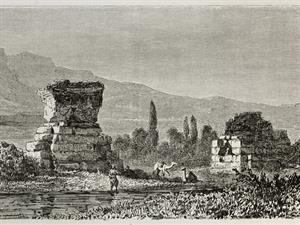 Ancient City of Lydia
This Kingdom was the World’s First Kingdom to issue “Standardized Metal Coins” in the \(7^{th}\) Century BCE, which paved the way for the use of coins with a monetary value as a medium of exchange.
Electrum: The Lydian Kingdom issued coins made of an alloy of gold and silver called the Electrum. They minted coins similar to one another, carrying different monetary values with their insignia printed on them.
The Spread of Money:
1. The usage of money was confined to the Mediterranean and the Middle East, but it was carried throughout the world by foreign merchants from various countries.
2. Many under-developed countries that were still reliant on primitive exchange methods began to see coins and money as the standard and most desirable medium of exchange for their goods.
3. When a small part of a country’s economy is occupied by money, it easily proliferates and colonises the rest of the country's economic systems.
4. Using money as a medium of exchange redefined society's thoughts, which began to view things in terms of the economy rather than social terms.
The Role of Money in the Modern-day: Chinese Ruler Kublai Khan
The Evolution of Money was seen as a great sign of development among the countries that adopted new methods of coins and currencies in later days that enabled them to carry out their economic activities effortlessly.
Kublai Khan: He was the emperor of China during the \(13^{th}\) Century, who was the first ruler to issue money in the form of paper. The “Chao” was the dominant paper money during his period.
In later days, money was used to prepare budgets. The government had the sole authority to print the money and made it available for the usage of people to run the country's economic cycle.
Exit to the topic
Next theory
Send feedback
Did you find an error?
Send it to us!