3. The Emergence of Coins

Coins as the New Alternate:
The Barter system was widely proliferated and followed by communities across the world. This system of Barter was lately replaced all over the world by the emergence of coins with a definite monetary value.
The earliest coins of the world were founded by the minor kingdom of Lydia, which is present in modern-day Turkey. They started to issue coins made of Electrum, an alloy of gold and silver.
Shekel: This was the widely prevalent currency issued by the Mesopotamian rulers nearly \(5000\) years ago.
Archaeologists collected evidence of the abundant proliferation of coins across the world as they went on to discover heaps of gold, silver, copper and lead coins in Asia, North Africa and Europe. Ancient Coins
The success of coins as an alternative to the Barter system was due to its transportability, durability (mostly made of metals) and the inherent face value it carried.
The Coins were minted by the Governments of the country, which further justified the high regard that the coins had over other economic systems.
Evolution of Coins:
The earliest coins were punch-marked and mostly made of Electrum (an Alloy); later, they were replaced by metals like silver and gold.
The later coins witnessed significant changes as the pictures of rulers and the countries began to appear carrying the royal insignia of the rulers, denoting the area where the coin has emerged from.
Coins and India: 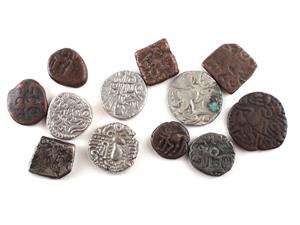 Ancient Indian Coins
Coins became an integral part of the Indian economy during the Mahajanapadas (big and independent kingdoms) in the 6th century. The earliest coins of India belonged to the category of punch-marked coins.
The Punch-marked coins had various names like Karshapanas, Puranas or Panas. These coins are made of silver with irregular shapes.
Arthashastra: This was the account written by Chanakya (the prime minister of Chandra Gupta Maurya), who mentioned the minting of gold and silver coins named “Suvarnarupa and Rupyarupa”.
Coins of the Mughal Empire:
The Mughal empire under Babur brought a unified and consolidated monetary system, and the evolution of the modern-day Rupee was seen under the reign of Humayun.
Sher Shah Suri, the emperor of the Sur dynasty who ruled India in the \(16^{th}\) century during the reign of Humayun, brought numerous changes in the field of administration. He also issued silver coins with the weight of \(178\) grains, later named “Rupiya”.
The Rupiya was used as the currency even during the Maratha and British period.
The Tamil Kingdoms of Chera, Chola and Pandya issued various coins with their symbols embedded in them.
Previous theory
Exit to the topic
Next theory
Send feedback
Did you find an error?
Send it to us!