7. The Cultural side of Medieval India

The Literature and Arts during Chola Period
Cholas of South India are considered one of the great patrons of art and literature during their reign. They also extended their patronage to various scholars like Ottakoothar, Sekkilar, and Kambar who lived and composed many songs during the Chola reigns.
Kambar: The poet wrote Kambaramayanam which was presented in Srirangam Ranganathar temple. He was also awarded the Sobriquet of “Kavichakravarthi” by King Kulothunga III.
Other notable works like Viracholiyam, Nannool, Periyapuranam, Kundalesi and Valayapathi were composed during the Chola Period. The literature augmented the cultural and Ethical Values of the Chola Society.
Temple Building under Cholas:
Temple construction in South India reached its zenith under the rule of Cholas, who built notable temples like the Brihadeeswara Temple, Gangai Konda Cholapuram temple etc. Chidambaram Nataraja Temple
The Sculptures which were made during the Chola rule are mostly made of Bronze, which was unique in its making.
Lost Wax Technique: This is a method of statue making that was introduced by the Cholas, and the statues made using this technique were known as Chola Bronze Statues.
The iconic statue of “Nataraja” in the Chidambaram temple was made with this technique during the Chola Period. During the reign of "Parantaka I” the roof of the Chidambaram temple was covered with Gold.
The Mughal – Arts and Architecture:
The Early Mughal rulers were great patrons of architecture who constructed numerous architectural splendours that still stand the test of time during their reign.

Buland Darwaza
Babur is credited for introducing the “Charbagh Style of Gardens”, in which buildings are built at the centre and Gardens surround the four sides. He was also praised for introducing the “Persian Style of Architecture in India” during his reign.
Purana Qila: It was built by Sher Shah of the Sur dynasty, who established other buildings like the Mausoleum he built in Bihar.
The Period under Akbar witnessed huge developments in Mughal architecture. He went on to build a new city named "Fatehpur Sikri", which was the first planned city in the Mughal empire. It was later made his capital.
Akbar Nama: This book was written by Abul Fasl, who was the court poet of Akbar. He also wrote “Ain-i-Akbari” in Persian.
Jahangir was the first Mughal ruler who introduced the “Portrait Painting” method of the rulers, and the Halo around the King's head was drawn for the first time during his reign. Miniature paintings were also introduced during his period.
Shah Jahan’s reign was the period during which the architectural epithets of Mughals reached their zenith. The artisans fondly called him as the “Prince of Builder". He also built the “Taj Mahal” in memory of his loving wife. 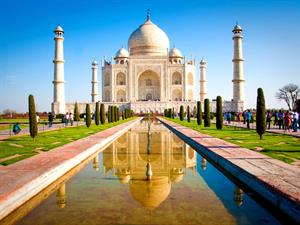 Taj Mahal
Various literature in Urdu, Persian, and Hindi flourished under the rulers of the Mughal empire. Poets and musicians were also encouraged to perform their songs and many new musical instruments were also introduced under the Mughals.
The Vijayanagar Art and Architecture:
Krishna Devaraya, considered the greatest ruler of the empire, is a huge patron of art and literature. He has contributed books like “Amuktamalyada” in Telugu and other poems and plays in many other languages.
Other rulers also encouraged the growth of literature in various languages like Tamil, Sanskrit, and Kannada other than Telugu.
Alasaani Pedanna: He is believed to be the greatest contributor to Telugu literature, known for his famous works like “Manucharitra and Harikathasarasamu”.
Other notable poets like Tenali Ramakrishna, Nandi Timmana, Madayya, Pingali Surana and Dhurajati also adorned the courts of various rulers and contributed significantly to the development of Telugu literature.
The architecture of Vijayanagar:

The Hampi Stone Chariot
The Rulers of the Vijayanagar empire loved to build lofty temples with gopurams which brought a new style into the existing architecture systems, and it was known by the name of Vijayanagar Architecture.
Horse: The picture of the Horse was the most commonly sculpted image in the pillars of Vijayanagar temples and Mandapas.
The most iconic features of the Vijayanagara architecture were the Rajagopuram and Kalyana Mandapas (Open Pavilions). Another important feature included the pillars embedded with designs.
Vithal Swami temple, Hasara Rama temple, and Hampi sculptures are the finest examples of the Vijayanagar empire.
Previous theory
Exit to the topic
Next theory
Send feedback
Did you find an error?
Send it to us!