6. The Imperial Roman Empire and its Fall

The Carthaginians of Africa:
Rome was growing into a mighty power under the reign of Augustus, which was flourishing with resources, fine arts and architecture. This period also witnessed the growth of Africa under the Carthaginians.
Carthaginians: These are Phoenician settlers from Port Tyre (Mediterranean port) and established a city-state in Carthage of North Africa.
The City-State of Carthage was the wealthiest among the region, and it had a well-trained and mighty Naval force. The Carthaginians set their eyes on Rome and Greece. They invaded the lands of Rome, which ignited a war between the Greeks and the Carthaginians known as the “Punic Wars”.
The Carthaginians were friendly ties with Rome and accepted them as their trading partner; when things were going smooth among the powers, Rome suddenly wanted a part of Sicily, which was under the control of Carthage. General Hannibal
Carthage appointed a new general Hannibal, who took command in Spain and marched towards Rome and defeated the forces of Rome in the Battle of Cannae in \(216\) \(BC\).
The Third Punic War \((149\) \(BC\) – \(146\) \(BC)\):
The Roman powers regrouped quickly under the able leadership of Fabius. He took on Hannibal in the Battle of Zama and defeated him convincingly. They drove away from the Carthaginians and captured their territories.
Chased by the powers of Rome, Hannibal committed Suicide to escape brutal torture from the Roman forces. Thus, the Roman forces ended the Carthaginians forces and their reign, which emerged as the “Mightiest empire of the Western world”.
The Fall of Roman Empire:
The Royal Roman empire slowly met its end due to various reasons they are given below:
1. The Invasion of Barbarian tribes (Goths) shackled the army of Rome.
2. Economic fallouts were due to continuous war and the emergence of groups among slaves.
3. Rise of Eastern European empire under the Byzantine powers. 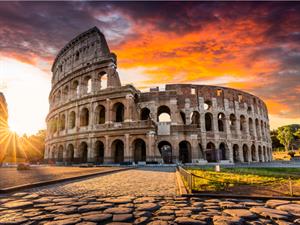 Roman Colosseum
4. Expansionary attitude and overspending on the military made the Roman empire bankrupt.
5. The Corrupt practice of Roman nobles and the political instability surrounding the empire.
6. The invasion of Vandals further weakened the Roman empire.
In \(476\) \(BC\), the final nail on the coffin of the Roman empire was laid when the German leader “Odoacer” staged a rebellion against the ruler of Rome, Romulus Augustus and dethroned him. Thus the Roman empire met its end.
Previous theory
Exit to the topic
Next theory
Send feedback
Did you find an error?
Send it to us!