4. Islam and the World

Prophet and Islam:
During the beginning of the Medieval period, a clash of various empires was taking place around the world; on the other side development of religions was happening in parallel.
Prophet Muhammad, who was believed to be the last in the line of Prophets on the lines of Jesus and Moses, gave the world a new religion named “Islam”.
Religion, according to the Prophet, taught fraternity and love among all the Muslims around the world. The Prophet was seen as a “Messenger of God” by the Muslims.
The Travel of Prophet Muhammad:
Prophet Mohammad was born in \(570\) \(AD\) in Mecca in a powerful “Quraish” tribal family. He started his early life as a trade merchant whose clan controlled a major trade route in Mecca. Prophet’s Travel
Mohammad started preaching about the voices he heard through meditation which spoke about the Monotheistic form of god. The trade merchants of Mecca belonging to various religions started hating the Prophet for his preaching.
Prophet Mohammad left Mecca and headed to the city of Yathrib in \(\text{622 AD}\) with his followers to escape persecution. This incident was named in Arabic as the “Hijra – the flight”.
The people of the city of Yathrib renamed the city “Medina” to celebrate the arrival of Prophet Mohammed.
The emergence of Factions in Islam:
Post the death of the Prophet in \(632\) \(AD\); a cultural rift took place within the religion of Islam, which is prevailing to date.

The leadership tussle among the followers of the Prophet resulted in tumultuous times in the Arabic world.
Islam and the Arab world:
The tenets of equality and brotherhood propounded by the Prophet attracted a huge number of people towards the religion of Islam as the world was facing Persecution and exploitation.
Post the death of Mohammad and the rift within the religion, both the parties accepted to have Omar and Abu Bakr as their “Khalifa (ruler)”, who went on to establish a mighty Islamic empire in Arabia.
Khalifa: He is a spiritual leader of the Muslim world who was believed to be the successor of Prophet Mohammad.
Conquests of Arabs:
The Arabs began to exert their dominance by invading and running over the mighty empires of Persia and Eastern Europe. The holy city of Jews and Christians, the “Jerusalem”, also felt the wrath of the Arab rulers. 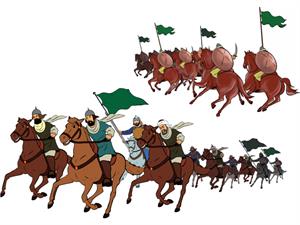 Arab Warriors
They also went on to capture Spain, which was under their control for a long period. To further bolster the power of Arabs, the nomads of Arab deserts called the “Saracens” joined them, which further strengthened the mighty empire.
Reference:
Prophet’s Travel - wikimedia commons
Previous theory
Exit to the topic
Next theory
Send feedback
Did you find an error?
Send it to us!