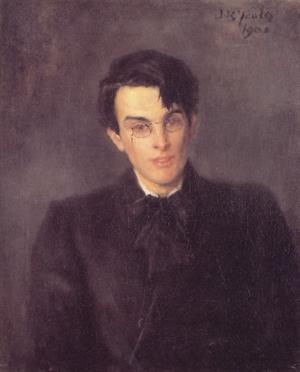 He was born on June \(13\), \(1865\), in Sandymount, Ireland, to John Butler Yeats and Susan Mary Pollexfen. His family was highly artistic: his father and a brother (Jack Butler Yeats) were esteemed painters, while two of his sisters, Elizabeth and Susan Mary, were involved in the Arts and Crafts movement.

When Yeats was two years old, his family relocated to London, although he spent much of his childhood and school holidays with his grandparents in Sligo. With its landscapes, mythology, and supernatural legends, this country would influence Yeats' work and serve as the backdrop for many of his poems.

He began writing his first works when he was seventeen. In \(1885\), Yeat’s poetry was published for the first time. The poems were "Song of the Fairies" & "Voices", and they were published in the Dublin University Review. Critics claim that his early writings were starkly conventional, having drawn inspirations from the works of great poets such as Edmund Spenser. Moreover, his themes echoed the works of great romantic poets such as Percy Bysshe Shelley and John Keats. However, he soon turned to Irish mythology and folklore. In addition, his writings became more physical and realistic. Also, the works of William Blake are often cited as an inspiration for Yeat’s later works.

Most of Yeats’s poems uses symbols from ordinary life and familiar traditions. However, his poems are as diverse as poetry could be. As you move from one work to another, you might be surprised to find that his works are transitional. One might discover traces of romanticism, transcendentalism, realism, national identity, myth, spiritualism, and political ideologies in his works. This shows how his themes and subjects had transformed through the course of his life.

Also, he can be experimental when it comes to the method of writing. For instance, his interest in spiritualism and the occult had led him to explore the field of "automatic writing"- a process of writing where the writer writes while in a spiritual trance as if guided by an external force.

Though his subjects varied, Yeats had strong beliefs when it came to the form of poetry. He firmly believed that a poet should place considerable emphasis on rhythm and meter and that a poem should have an appealing and appropriate form and style. Hence, he wrote poetry that rhymed, and he disregarded the poets who wrote in free verse.

Yates received the Nobel Prize for Literature in \(1923\). He died at the Hôtel Idéal Séjour, in Menton, France, on \(28\) January \(1939\), aged \(73\).
Some of his important works are:
Important!
The name 'Yates' is pronounced as 'Yates'.
Reference:
**https://en.wikipedia.org/wiki/W._B._Yeats#/media/File:William_Butler_Yeats_by_John_Butler_Yeats_1900.jpg
Previous theory
Exit to the topic
Next theory
Send feedback
Did you find an error?
Send it to us!