Belinda paled, and she cried Help! Help!
But Mustard fled with a terrified yelp,
Ink trickled down to the bottom of the household,
And little mouse Blink strategically mouseholed.
But up jumped Custard, snorting like an engine,
Clashed his tail like irons in a dungeon,
With a clatter and a clank and a jangling squirm,
He went at the pirate like a robin at a worm.
The pirate gaped at Belinda’s dragon,
And gulped some grog from his pocket flagon,
He fired two bullets, but they didn’t hit,
And Custard gobbled him, every bit.
Explanation:
We tend to understand who our true friends are only in difficult times. We can claim to have a lot of friends, but that does not mean that we can expect them to be there for us all the time. People stay with us and make lengthy promises, but at the first sign of a time of crisis, they run away and focus only on themselves. It is not wrong to focus on oneself and be a little selfish, but it is different when one makes lengthy claims and does not keep up with them. When someone is in danger, one's first instinct is to seek help. But we must also ensure that we care for our loved ones.
People keep pets for fun and also to help them in some way. Dogs are supposed to guard and protect their master, but Mustard, the dog, was the first one to run away from the scene as soon as he saw the pirate climbing down the window. Belinda cries for help as she is sure that the pirate will attack her with all the weapons in hand. She grew pale out of fear. Mustard fled from the scene, letting out a terrified yelp as he was scared. Cats have a quick pace when it comes to running, and therefore Ink took off to the bottom of the household and hid away. Blink being a mouse, did not have to look for a hideout, as he could easily scuttle into any hole, and no one could reach into it. This shows that people can boast about their strength and loyalty all they want, but that does not mean they might keep up with them.
People who are criticised for being good for nothing might actually turn up to be of great help when there is a crisis. Similarly, Custard flares up when he sees the pirate. He rises to the situation. He jumped up and snorted smoke from his nostrils like an engine. He is so huge that when he stands up, his tail moves and clashes against things as if someone is clashing irons in underground passages. With a lot of noise being produced, he swiftly eyed the pirate as a robin bird would look at its worm food. The pirate was not expecting such a dragon, and he gaped in shock. He drinks up some alcohol which he had in his pocket, as he was scared. He also fired two bullets from his guns in both hands. But Custard having the thick skin he had, did not get hit. Rather, Custard gobbled the pirate fully, killing him. 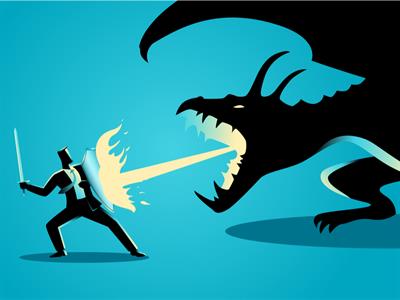 The dragon attacked the pirate
Meaning of difficult words:
Reference:
National Council of Educational Research and Training (2006). Beehive. The Tale of Custard the Dragon - Ogden Nash (pp. 129-132). Published at the Publication Division by the Secretary, National Council of Educational Research and Training, Sri Aurobindo Marg, New Delhi.
Previous theory
Exit to the topic
Next theory
Send feedback
Did you find an error?
Send it to us!