“Out through that window, three years ago to a day, her husband and her two young brothers went off for their day’s shooting. They never came back. In crossing the moor to their favourite shooting ground they were all three engulfed in a treacherous piece of bog. It had been that dreadful wet summer, you know, and places that were safe in other years gave way suddenly without warning. Their bodies were never recovered. That was the dreadful part of it.” Here the child’s voice lost its self-possessed note and became falteringly human. “Poor aunt always thinks that they will come back someday, they and the little brown spaniel that was lost with them, and walk in at that window just as they used to do. That is why the window is kept open every evening till it is quite dusk. Poor dear aunt, she has often told me how they went out, her husband with his white waterproof coat over his arm, and Ronnie, her youngest brother, singing ‘Bertie, why do you bound?’ as he always did to tease her, because she said it got on her nerves. Do you know, sometimes on still, quiet evenings like this, I almost get a creepy feeling that they will all walk in through that window... ”
Explanation:
Vera begins by narrating the tragic event that happened to Mrs Sappleton.

Three years ago to the day, her husband and two young brothers headed out through the window for their day's shooting. However, they never returned. Unfortunately, while crossing the moor to their favourite shooting ground, they got caught in a dangerous piece of bog and was drowned to death.

Bog
Vera claims that it had been a horrible wet summer. The season had seen unusual rains, and the places had become damp and dangerous. She adds how the spots that had been safe in previous years had suddenly given way without warning.

Moreover, their remains were never found, and as Vera continues, that was the most horrible part of the tragedy. At this point, the narrator describes how Vera's voice had lost its self-assured tone and had become "falteringly human". It shows how her emotions overcame her. 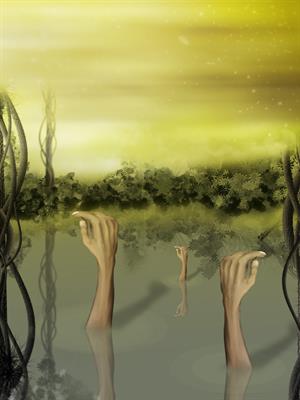 The remains of the three dead men were never found
The fact that their bodies were never recovered is cited as the most dreadful part of the incident. The reason is that the presence of a corpse could give closure to death itself. That is, it is harder for people to move on from the death of a dear one if they never got to see the dead body. There is always a part in them that hopes that the dead could be, after all, alive!

As predicted, Vera states that her aunt constantly hopes that her loved ones would return. As she still believes that they could be alive, she keeps waiting for her husband, her brothers, and the little brown spaniel that went missing with them. (Dogs such as spaniels are used as gun dogs in hunting. Their role in hunting would be to assist their masters by finding and retrieving the birds or animals that their master had shot.) She leaves the window open every evening until dusk, expecting them to walk in through that window like they used to.

Later, Vera adds little details to the story by describing how the trio had left on that fateful day. Mrs Sappleton's husband was wearing his white waterproof coat over his arm, and her youngest brother named Ronnie had teased her by singing, "Bertie, why do you bound?".

"Bertie, why do you bound?" refers to the line from the song "Bertie the Bounder", which was, in turn, a part of the \(1909\) Edwardian musical comedy titled "Our Miss Gibbs". Ronnie used to sing the song because he knew it annoyed Mrs Sappleton.

Finally, Vera concludes her narrative by stating how there are times when she would have an unsettling feeling. She explains how she used to get a creepy feeling they'll all walk in through that window on still, quiet evenings such as this.

Speaking about Mrs Sappleton’s tragic story, it is interesting to note how Vera had structured her narrative. She started her narrative from the end by declaring that there had been a tragedy. Vera had established the fact the story doesn't end well. She then causes curiosity by introducing the open window and stating a mysterious reason behind it. This helps in building momentum. Later, she jumps right into her narrative by describing what, how, and why the tragedy had happened. She never beats around the bush. Finally, the ending that describes Vera's "creepy feeling" helps the story end with a bang, with the phrase "on still, quiet evenings like this" making it more intense. Moreover, the little details such as the dog, song and white raincoat help make the story more personal and real to the listener.
Meanings of difficult words:
Reference:
National Council of Educational Research and Training (2008). The Open Window – Saki (pp. 55 - 61). Published at the Publication Division by the Secretary, National Council of Educational Research and Training, Sri Aurobindo Marg, New Delhi.
Previous theory
Exit to the topic
Next theory
Send feedback
Did you find an error?
Send it to us!