“I will come with you and see Johnsy,” Behrman said.
They tiptoed into the room. Johnsy was sleeping. Sue drew the curtains together and they went to the next room. She peeped out through the window. There was only one leaf on the creeper. It was raining heavily and an icy-cold wind was blowing. It seemed as though the leaf would fall any minute now. Behrman did not say a word. He went back to his room.
Johnsy woke up next morning. In a feeble voice she asked Sue to draw the curtains. Sue was nervous. She drew back the curtains very reluctantly.
“Oh!” Sue exclaimed as she looked at the vine creeper. “Look, there is still one leaf on the creeper. It looks quite green and healthy. In spite of the storm and the fierce winds, it didn’t fall.”
“I heard the wind last night,” said Johnsy. “I thought it would have fallen. It will surely fall today. Then I’ll die.”
“You won’t die,” said Sue energetically. “You have to live for your friends. What would happen to me if you die?”
Explanation:
Then the old Behrman said that he would come with Sue to see Johnsy. Behram and Sue entered the room quietly. They noticed that Johnsy had fallen asleep. Without disturbing Johnsy, Sue shut the curtains, and they went to the adjoining room. Later, Sue looked out of the window. She noticed there was only one leaf left on the creeper. 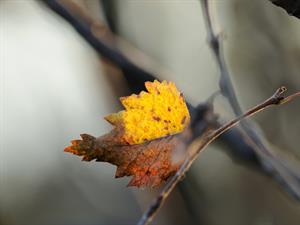 The last leaf
Meanwhile, there was heavy rain accompanied by strong, cold winds. While looking at the leaf, one can understand that the leaf may fall at any moment. After noticing the weak leaf, Behrman did not say anything. Later, he went back to his room.

The following day, Johnsy woke up, and in a weak voice, she asked Sue to open the curtains. Sue was afraid because she didn't know whether the leaf was there. Also, there was a heavy storm the previous night, and it worried her. Later, she opened the curtains unwillingly. When Sue looked at the vine creeper, she exclaimed, "Oh!" She informed Johnsy that there was still a leaf left on the creeper. Also, she said that the leaf appeared green and healthy. The leaf didn't fall even though there was a heavy storm and strong wind. Green and healthy leaf
At that moment, Johnsy said that she had heard the strong wind blowing the previous night. She had thought that the leaf would fall. Later, she said that it would fall that day for sure and then she would die too. After hearing Johnsy's words, Sue said that Johnsy would not die. Moreover, she said that Johnsy had to live for her friends. In addition, Sue said that she couldn't imagine what would happen if Johnsy died. Through this statement, one can understand the caring and real friendship of her friend Sue. She wanted to make Johnsy recover from her illness. So she tried hard to support her.
Meanings of the difficult words:
Reference:
National Council of Educational Research and Training (2006). Moments. The Last Leaf– O Henry (pp. 44-48). Published at the Publication Division by the Secretary, National Council of Educational Research and Training, Sri Aurobindo Marg, New Delhi.
Previous theory
Exit to the topic
Next theory
Send feedback
Did you find an error?
Send it to us!