SUE and Johnsy, two young artists, shared a small flat. The flat was on the third storey of an old house.
Johnsy fell very seriously ill in November. She had pneumonia. She would lie in her bed without moving, just gazing out of the window. Sue, her friend, became very worried. She sent for the doctor. Although he came every day there was no change in Johnsy’s condition.
One day the doctor took Sue aside and asked her, ”Is anything worrying Johnsy?”
“No,” replied Sue. “But why do you ask?”
The doctor said “Johnsy, it seems, has made up her mind that she is not going to get well. If she doesn’t want to live, medicines will not help her.”
Explanation:
The lesson “The Last Leaf” is written by Oscar Wilde. The story takes place in New York City at the time of a pneumonia pandemic.
The lesson opens with the narrator introducing two female characters to his readers: Sue and Johnsy. They were close friends. Both of them lived together in a small flat. The flat was on the third floor of an old house. The two girls were young artists. The term “artist” refers to a person who creates paintings as a profession or hobby. 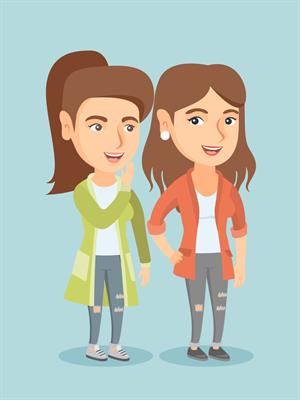 Sue and Johnsy
After introducing the two characters, the narrator tells about the health condition of Johnsy. He said that Johnsy was affected by pneumonia in November. Due to her illness, she would lie in her bed and look out of the window. On seeing her friend’s situation, Sue became very sad. So she called a doctor. The doctor came to see Johnsy every day, but her health condition did not improve. Johnsy remained still in her bed

One day, the doctor visited Sue’s and Johnsy’s house to check Johnsy’s health condition. After examining, the doctor thought that there was something wrong with her. So he called Sue aside and asked her whether Johnsy had any worries or sufferings. The doctor made the statement because even after treating her well and giving the required medicines, there was no improvement in her health. So he wanted to know the thing worrying Johnsy.

After hearing the doctor’s statement, Sue said that nothing was worrying her. After replying, she asked the doctor why he had asked such a question. Later, the doctor responded that it seemed that Johnsy had made a firm decision that she would not recover from pneumonia. If she had such a notion in her mind, medicines would not work on her. Johnsy had a negative thought, and if she continued thinking about her death, no one could help her.
Meanings of the difficult words:
Reference:
National Council of Educational Research and Training (2006). Moments. The Last Leaf– O Henry (pp. 44-48). Published at the Publication Division by the Secretary, National Council of Educational Research and Training, Sri Aurobindo Marg, New Delhi.
Previous theory
Exit to the topic
Next theory
Send feedback
Did you find an error?
Send it to us!