Sue tried her best to make Johnsy take an interest in things around her. She talked about clothes and fashions, but Johnsy did not respond. Johnsy continued to lie still on her bed. Sue brought her drawing-board into Johnsy’s room and started painting. To take Johnsy’s mind off her illness, she whistled while working.
Suddenly Sue heard Johnsy whisper something. She quickly rushed to the bed and heard Johnsy counting backwards. She was looking out of the window and was saying, “Twelve!” After sometime she whispered “eleven”, then “ten”, then “nine”, “eight”, “seven”. Sue anxiously looked out of the window. She saw an old ivy creeper climbing half-way up the brick wall opposite their window. In the strong wind outside, the creeper was shedding its leaves.
“What is it, dear?” Sue asked.
“Six,” whispered Johnsy. “They are falling faster now. Three days ago there were almost a hundred leaves. There are only five left now.”
Explanation:
Later, Sue made every effort to arouse Johnsy’s curiosity in the things around her. She discussed many interesting things like clothes and fashion with her, but Johnsy remained quiet. Even after hearing Sue’s talk, Johnsy lay still on her bed. As Johnsy was also an artist, Sue thought that she would provoke Johnsy’s interest through drawing. As a result, Sue brought her drawing board inside Johnsy's room. Later, Sue started the painting to create an interest in her and take her mind off from her illness. Meanwhile, Sue would whistle at times while painting to boost up Johnsy. 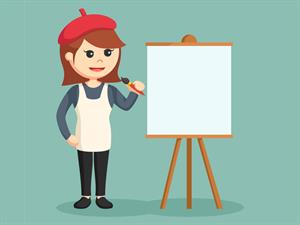 Sue brought her drawing-board into Johnsy’s room
While Sue was painting, she heard Johnsy murmuring something. To know what she was saying, Sue quickly moved towards the bed. Sue heard Johnsy counting numbers backwards. While lying in bed, Johnsy looked out of the room’s window and said, “Twelve!” After some time, Johnsy muttered “eleven”, then “ten”, then “nine”, “eight”, “seven”.

Meanwhile, Sue was curious and looked outside the window. She noticed an old ivy creeper spreading halfway upon the brick wall. The creeper was growing opposite to their window. As the strong wind blew, the leaves of the creeper were falling. Ivy creeper on a wall
After noticing the strange things, Sue asked Johnsy what the matter was. Initially, Johnsy didn’t respond to her. She continued counting backwards. Later, she mumbled as “Six”. After counting six, Sue said that the leaves were shedding faster. In addition, she said that there were many leaves on the ivy creeper three days ago – almost one hundred leaves, but now only five were left.
Meanings of the difficult words:
Reference:
National Council of Educational Research and Training (2006). Moments. The Last Leaf– O Henry (pp. 44-48). Published at the Publication Division by the Secretary, National Council of Educational Research and Training, Sri Aurobindo Marg, New Delhi.
Previous theory
Exit to the topic
Next theory
Send feedback
Did you find an error?
Send it to us!