“It is autumn,” said Sue, “and the leaves will fall.”
“When the last leaf falls, I will die,” said Johnsy with finality. “I have known this for the last three days.”
“Oh, that’s nonsense,” replied Sue. “What have old ivy leaves to do with your getting well? The doctor is confident that you will get better.”
Johnsy did not say anything. Sue went and brought her a bowl of soup.
“I don’t want any soup,” said Johnsy. “I am not hungry… Now there are only four leaves left. I want to see the last one fall before it gets dark. Then I will sleep forever.”
Sue sat on Johnsy’s bed, kissed her and said, “You are not going to die. I can’t draw the curtain for I need the light. I want to finish the painting and get some money for us. Please, my dear friend,” she begged Johnsy, “promise not to look out of the window while I paint.”
Explanation:
After hearing that the ivy creeper was shedding its leaves day by day, Sue replied that it was autumn. Also, she said that it is a natural phenomenon that creeper sheds its leaves during that season. On the other hand, Johnsy said that she would die when the last leaf fell. Moreover, she said that she had known about that for the last three days. It means that Johnsy was counting her life with the shedding of leaves. She thought that she would die when the last leaf of the ivy creeper fell. Leaves fall in the autumn season
After hearing the foolish talk of Johnsy, Sue said, “Oh, that’s nonsense”. Sue made the statement because she couldn’t accept whatever Johnsy was saying. Sue knew that Johnsy was making meaningless statements. Later, Johnsy thought of consoling her. So she said that the leaves had nothing to do with Johnsy’s health. The falling of leaves did not predict someone’s future. Also, she added that the doctor was sure that Johnsy would recover from her illness.

Later, Johnsy did not make any remarks. She remained silent. So Sue went to the kitchen and brought a bowl of soup for Johnsy. After seeing the soup, Johnsy said she was not hungry and did not want to drink the soup. Then she said that there were only four leaves left on the ivy creeper. She wanted to see the last leaf fall before the sunset, and then she could die peacefully. Here, one can understand that Johnsy was stuck on believing that she would die when the last leaf fell. On the other hand, Sue tried to motivate her by saying that it was an autumn season and there was nothing to panic about. 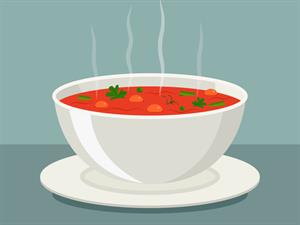 A bowl of soup
Sue tried to show affection towards Johnsy. She sat on Johnsy’s bed and kissed her. Then she motivated her and said she was not going to die. Later, Sue said she could not close the curtain because she needed light to complete the painting. In addition, she said that she would sell the painting to fetch money for them. As the two girls were staying together, they required money for running their livelihood. Their profession was painting. As Johnsy was affected with pneumonia, Sue had to run the family and look after Johnsy’s health. So she requested her friend Johnsy not to look out of the window while she was painting.
Meanings of the difficult words:
Reference:
National Council of Educational Research and Training (2006). Moments. The Last Leaf– O Henry (pp. 44-48). Published at the Publication Division by the Secretary, National Council of Educational Research and Training, Sri Aurobindo Marg, New Delhi.
Previous theory
Exit to the topic
Next theory
Send feedback
Did you find an error?
Send it to us!