8. Explanation of the poem "I am Every Woman"

The poem "I am Every Woman" talks about the strength and beauty of a woman. The poem contradicts several myths about women, especially those perceived by men. It opens with the speaker declaring that a woman's beauty is natural and inborn. However, the beauty that the speaker is talking about is not physical. Rather, it is her strength and power. Often, a woman becomes objectified, making her a subject of physical beauty. On the other hand, a female perspective of a woman is different. Instead of being a symbol of beauty, she becomes a symbol of power and strength. A woman is a symbol of power and strength
The third line of the poem, "she puts her life at stake", stands in contrast to the popular belief that women are more risk-averse than men.
It is never fair to group people into a single category. People are different, irrespective of gender. They lead different lives, and their struggles are different too. Hence, when the speaker described the woman as someone who puts her life at risk, the risk could be of any kind. It could be mental, physical, professional, or personal.
For instance, several women from India may have to put their work at risk to take care of their family, or vice versa. In certain other scenarios, they may have to put their health at risk (mental or physical) to balance their professional and private lives.
Finally, the speaker ends the stanza by declaring that she is real and not fake.
In the second stanza, the speaker describes life through the metaphors of seasons. The speaker explains how the woman is ready to see spring in the summer of her life. Here, summer is seen as a period of growth.

Every season is associated with a set of meanings. Seasons are often used as metaphors in several literary works. Yoko Ono, a Japanese-American artist, describes the four major seasons in the following lines:

In the poem "I am Every Woman", the speaker uses the season of summer to refer to the good and prosperous period in one's life. So, while summer is a period of achievement, spring denotes a period when people begin to evolve. The speaker says that the woman is so capable of achieving greatness at such a young age. Also, she can be more mature and forward-thinking for her age.

In the second line of the stanza, the speaker uses the season of spring in a different context. While the "spring" in the first line talks about a period in one's life, the "spring" in the second line talks about positive ideas such as hope and good fortune. She is likelier to give up on opportunities to take care of her family and loved ones, believing that "spring" (as in good fortune and opportunities) will knock on her door again. A woman is an emotional being, and hence her priority is often the well being of her dear and near ones.

Though she is bound by love, she is never a coward. She stands tall and fearless.

The speaker further explains that the secret to everything is "persistence". The woman stands firm, not because she has an easy life. Instead, she knows how to be persistent. She keeps trying, despite the failure and obstacles she keeps facing. The words "sighs", "groans", and "moans" signify the hurdles and disappointments she constantly faces. Regardless of those sighs, groans, and moans, she remains strong in her faith and firm in her belief. 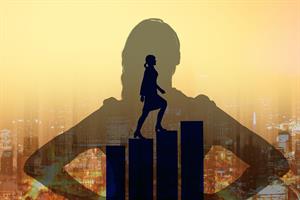 Despite the hurdles, she strives to move ahead
In the fourth stanza, the speaker brings out the fierce side of a woman. She says that the woman is as ferocious and wild as a lioness. The speaker warns the readers of the same. She asks people not to mess with her, for they may end up becoming her prey. In the earlier stanzas, we saw that the woman stands for and by her dear ones. However, this stanza shows that she can't be taken for granted.

All the pranksters, be warned! She will never spare you if she learns about your true nature. She is as fierce as a lioness
Also, the speaker further reminds the readers that a woman, like any human, has pride and self-respect. Hence, people should learn to respect her and her emotions. One should never attempt to belittle her pride or self-respect. The speaker hints that failing to do so wouldn't sit well with her; she would either freeze them to death or cut them into pieces.
The fifth and final stanza is a couplet. Though the speaker has spoken about a woman so far, in the concluding stanza, the speaker reveals that the woman in the poem is "today's woman". Today’s woman is different from yesterday's woman in so many ways. Women of earlier generations are known and celebrated for being "obedient", "humble", "homemaking", “child-rearing”, “selfless”, “invisible”, and such. A woman who is independent, educated, and voices out the discomforts and disparity is termed arrogant and unwomanly and is considered undesirable by society.

Back then, women were often "brainwashed" into thinking that having a voice for themselves was a bad quality for a woman. As a result, she would easily succumb to the roles created for her.

But women, over time, have managed to break away from such social constructs to an extent. Today's women are headstrong and independent and are not afraid to remain so. She may not be selfless, but she would never be selfish. Today's woman is wild as a lioness and beautiful as love.

She is the woman of today. So, the speaker asks the readers to respect her, love her, and keep her close.

The line "Today's woman, dear. Love her, respect her, keep her near..." could be addressed to the woman herself, reminding her who she is and who she could be. There is a strong-willed woman in every woman, and the speaker urges her to embrace and cherish the woman.
Previous theory
Exit to the topic
Next theory
Send feedback
Did you find an error?
Send it to us!