“Oh! what will become,” says the cricket, “of me?”
At last by starvation and famine made bold,
All dripping with wet, and all trembling with cold,
Away he set off to a miserly ant,
To see if, to keep him alive, he would grant
Him shelter from rain,
And a mouthful of grain.
He wished only to borrow;
He’d repay it tomorrow;
Explanation:
The cricket had not saved any food for the future, and he wondered what would happen to him if he did not have food. He would have to starve without food if he did not do anything now. The cricket was literally starving because of the lack of food. Since the food situation had hit the entire place, it is referred to as a famine situation. He saw that he was in a very helpless situation. He was soaked, wet and shaking because of the extreme cold weather. 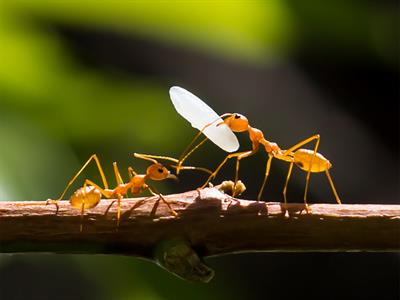 Ants carrying rice grain
When one is in a helpless and pathetic situation, they tend to lose their ego and mustered the courage. The world is designed in such a way that it operates in a way that each person helps the one in need. But he himself was the sole reason for being in this situation. He, therefore, gathered courage from the fear of being without food; he started his journey to visit the ant and ask his help. The cricket wanted to borrow from the ant and repay it in the future (tomorrow refers to the future, not the next day).
The ant is referred to as miserly only from the point of view of the cricket, as the ant hoards up food in a lesser amount and daily basis. The cricket who had never done any of this calls the ant miserly, yet asks help from the ant.  Miser refers to people saving a lot and spending very little. It can be given a positive meaning here to praise the ant's quality of thinking about the future and preserving food for the cold days. He is in search of two things, predominantly in the winter season.
The cricket asks the ant for shelter, in spite of knowing that ants live in groups in small holes, which would not fit in the cricket. Also, the cricket eats the plant and plant-based stuff predominantly but knows that ants only hoard rice grains. This shows that one does not have a choice and has to cut down on specifics if one fails to do the work on time. He knows this fact and is completely at the ant's mercy.
Meanings of difficult words:
Reference:
State Council of Educational Research and Training 2019. Term 1 English Standard - 10.The Ant and the Cricket - Aesop's Fables (pp. 115 -119). Published by the Tamil Nadu Textbook and Educational Services Corporation.
Previous theory
Exit to the topic
Next theory
Send feedback
Did you find an error?
Send it to us!