I started for school very late that morning and was in great dread of a scolding, especially because M. Hamel had said that he would question us on participles, and I did not know the first word about them. For a moment I thought of running away and spending the day out of doors. It was so warm, so bright! The birds were chirping at the edge of  the woods; and in the open field back of the saw mill the Prussian soldiers were drilling. It was all much more tempting than the rule for participles, but I had the strength to resist, and hurried off to school.
When I passed the town hall there was a crowd in front of the bulletin-board. For the last two years all our bad news had come from there — the lost battles, the draft, the orders of the commanding  officer — and I thought to myself, without stopping, “What can be the matter now?”
Explanation:
The story "The Last Lesson" was written by Alphonse Daudet. The lesson wonderfully captures the human tendency to put off learning new things because they believe they have lots of time, yet they have no idea when doomsday will arrive and put an end to our ambitions and dreams.

The narrator of the story, little Franz, is a young school-going boy. One fine morning, the narrator was fearful because he was already late for school. He was well aware that his teacher, M. Hamel, would scold him, particularly for failing to revise the topic. The narrator's teacher had told the day before that he would question them on participles. The narrator, however, did not know anything about the topic, and he was more scared of being scolded. 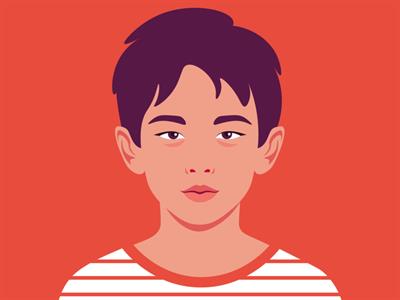 Franz
For the time being, the narrator had another thought going in his mind. It was to run away from the class and enjoy the day out. As the weather was warm and bright, he thought of enjoying it. The narrator then describes the scenes outdoor to his readers. At the edge of the woods, birds were chirping. Behind the sawmill, he could hear the sound of Prussian soldiers drilling.

The landscape outdoors was more appealing than the school. The scenic beauty was tempting the narrator more than the rules of participles, but he resisted the desire and chose to attend school. The narrator then noticed a large gathering at the bulletin board as he passed past the town hall. He said that the bad news like losing the battles, the draft (messages/pieces of information), and the commanding officer's orders had been communicated to the people through this bulletin board for the last two and half years. The narrator continued heading towards the school, wondering what news might have been posted on the bulletin board at this time.
Meanings of the difficult words:
Reference:
State Council of Educational Research and Training (2018). Term-1 English Standard-10. The Last Lesson - Alphonse Daudet (pp. 162-178). Published by the Tamil Nadu Textbook and Educational Services Corporation.
Previous theory
Exit to the topic
Next theory
Send feedback
Did you find an error?
Send it to us!