Downstairs, we could hear the tromping of the other police. Police were all over the place; doors were yanked open, drawers were yanked open, windows were shot up and pulled down, furniture fell with dull thumps. A half-dozen policemen emerged out of the darkness of the front hallway upstairs. They began to ransack the floor; pulled beds away from walls, tore clothes off hooks in the closets, pulled suitcase and boxes off shelves. One of them found an old zither that Roy had won in a pool tournament. ‘Looky here, Joe,’ he said, strumming it with a big paw. The cop named Joe took it and turned it over. ‘What is it?’ he asked me. ‘It’s an old zither our guinea pig used to sleep on,’ I said. It was true that a pet guinea pig we once had would never sleep anywhere except on the zither, but I should never have said so. Joe and the other cop looked at me a long time. They put the zither back on a shelf.

The narrator begins by claiming that he could "hear" the officers "tromping" about. The word "tromp" suggests a heavy footstep, probably because of the boots the police were wearing. Then he describes how the doors and drawers were "yanked" open, windows were "shot" up and down, and furniture "fell with dull thumps". The words "yanked", "shot up", and "thumps" describe not just actions but the actions that are accompanied by sounds. He could also make out through the noises that the police were all over the house.

Later, a half-dozen police officers climbed upstairs to where the narrator was standing. It is interesting to note the phrase “a half-dozen” here. The narrator could have simply said that there were about six police officers. (A dozen is 12, and half of it is 6.) Instead, he chose an alternative that evokes a bigger number. The narrator wanted to emphasise the point that there were too many of them.
The narrator says that the police "emerged out of the darkness". Here, darkness could be seen in two different senses. Firstly, it could be of literal sense. It was dark because it was night. Secondly, the narrator describes the police to be 'emerging from darkness' because he could finally see them (and not just hear what they were doing). The following description of the police's action upstairs and the narrator's choice of words reveal the above point.

One might also wonder why the police had to emerge from the darkness and use so many flashlights when all they could have done was flick the switch to turn on the lights. The reason could be that electricity was more of a luxury in the early \(1900s\). We are sure that the narrator's house had an electricity connection as he had spoken about it in one of the previous stories, "The Car We Had to Push", from the collection My Life and Hard Times. It was majorly used as a source of light. However, being a luxury, people sparsely used it, and hence, the house isn't likely to be well lit.

Back to the story, the police are thoroughly searching the house. 'They began to ransack the floor, pulled beds away from the walls, tore clothes off hooks in the closets, and pulled suitcases and boxes from shelves.’ Here, one could observe that the details presented by the narrator are strikingly visual. He can see, and not just hear, what they were doing. He is reasonably specific about what had been happening: the police pulled out clothes from the cupboards, searched the floor rather heavily, moved beds away from the walls (so that they could look under the beds and also search the corners of the room), and even brought out the suitcases and other storage boxes stored away in shelves. In short, they turned the whole house upside down in searching nook and corner of the house.

So, while searching through the house, a policeman found an old zither. It belonged to the narrator's younger brother, Roy, who, as we have seen previously, is on a trip to Indianapolis with his father. He had won the zither in a pool tournament. In a whimsical sense of humour, the narrator observes how the policeman plays it, or rather strums it, with a "big paw". The phrase "big paw" sufficiently describes how inefficient and clumsy was the policeman with the instrument. Also, since the narrator described the instrument as old and forgotten, Roy may have won it in a childhood tournament. As a result, it is more likely that the zither was smaller (and toylike) than the traditional instrument. It explains the following two ideas: firstly, the policeman played the instrument poorly. Secondly, the instrument felt too small at the hands of the policeman.
An artist playing a zither
Back to the story, the policeman asks a fellow policeman named Joe to take a look at the zither.  The entire scene involving the policeman and the zither is comical yet mildly philosophical. It is humorous because one could see that the officer who seemed involved in the search got quite detracted when he saw a small, irrelevant artefact. On the other hand, the scene reminds us how there is a child in every adult; the police officer became all too excited and childlike when he saw the zither.

So, we see that Zoe has taken the zither and is looking it over. 'What is it?' he inquired, to which the narrator explained that it was an old zither that their pet guinea pig used to sleep on. The narrator asserts that their pet guinea pig would never sleep anywhere else, but he soon regrets saying so. Joe and the other policeman exchanged long looks with the narrator. They then returned the zither to its shelf.

There could be several reasons why the police officers stared at the narrator, yet, the narrator mentions none. Nevertheless, one could see that it was the mention of a guinea pig using the zither as a bed that had triggered the response. Could it be that the officers considered the zither to be unhygienic? Guinea pigs tend to eat all day, and due to that, they also excrete more than other animals. So, if the zither happened to be the pet's home, it was likely that the zither might have become its lavatory. That could explain why the police officers seemed disturbed. 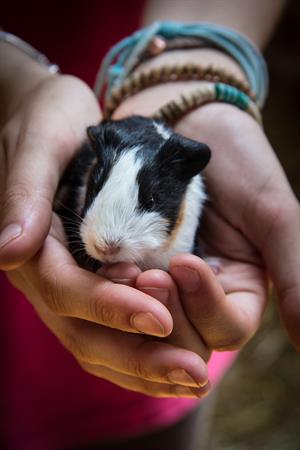 A guinea pig
Meanings of difficult words:
Reference:
State Council of Educational Research and Training (2019). English Standard-10. The Night the Ghost Got In - James Grover Thurber (pg. 30 - 33). Published by the Tamil Nadu Textbook and Educational Services Corporation.
Previous theory
Exit to the topic
Next theory
Send feedback
Did you find an error?
Send it to us!