“O my young gentleman,” said Ariel, when he saw him, “I will soon move you. You must be brought, I find, for the Lady Miranda to have a sight of your pretty person. Come, sir, follow me.”
He followed in amazement the sound of Ariel’s voice, till it led him to Prospero and Miranda, who were sitting under the shade of a large tree. Now Miranda had never seen a man before, except her own father.
“Miranda,” said Prospero, “tell me what you are looking at yonder.”
“O father,” said Miranda, in a strange surprise, “surely that is a spirit. Lord! How it looks about!Believe me, it is a beautiful creature. Is it not a spirit?”
“No, girl,” answered her father; “it eats, and sleeps, and has senses such as we have. This young man you see was in the ship. He is somewhat altered by grief, or you might call him a handsome person. He has lost his companions, and is wandering about to find them.”
Explanation:
When Ariel saw Ferdinand, he said, "O my young gentleman". Ariel said that he would take him to Miranda. Ariel believed that Ferdinand must be brought for Lady Miranda to see the good humane person. He asked Ferdinand to follow him. As Ariel was a spirit, Ferdinand was unable to see him. He could hear only the voice of Ariel. Ferdinand, in astonishment, followed Ariel's voice and reached near Prospero and Miranda.

Meanwhile, Prospero and Miranda were sitting under the shade of a large tree. When Ferdinand reached there, she saw Ferdinand. She was surprised to see him because she had never seen any other human face than her father's.
After seeing her face, Prospero asked his daughter what she was looking for. Miranda exclaimed in a strange surprise and said it was a spirit for sure. In addition, she said that the creature looked beautiful. Later, she asked if it was not a spirit. Miranda made these statements because she had never seen such a lovely creature before. While seeing the beautiful appearance of Ferdinand, she was unable to accept the truth that he was a human being. And also, she was not aware there was human existence in the world. 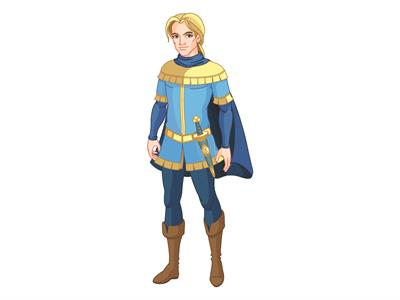 A handsome young Prince
After hearing his daughter's strange words, Prospero said that the creature was not a spirit. He was a human being who ate and slept and had the senses such as they have. In addition, he stated that this young man she had seen had been on the ship. He made the statement to understand that the handsome young man was caught in the heavy storm that occurred in the sea.
Prospero said that sadness changed Ferdinand, or she might call him handsome. He was in grief because he was separated from his friends and looked for them.
Meanings of the difficult words:
Reference:
State Council of Educational Research and Training (2018). Term-1 English Standard-10. The Tempest- William Shakespeare (pp. 21-27). Published by the Tamil Nadu Textbook and Educational Services Corporation.
Previous theory
Exit to the topic
Next theory
Send feedback
Did you find an error?
Send it to us!