Is there anybody there?’ said the Traveller,
Knocking on the moonlit door;
And his horse in the silence champed the grasses
Of the forest’s ferny floor: And a bird flew up out of the turret,
Above the Traveller’s head:
And he smote upon the door again a second time;
‘Is there anybody there?’ he said.
Explanation:
A traveller who was travelling on a horse comes across a house located in the middle of the wood. He knocks at the door, enquiring if there is anyone inside. It was late in the evening, and the door was visible because of the moonlight.
The horse was too tired and hungry. While the traveller was knocking at the house silently, the horse grazed the grasses nearby. It was a forest full of ferns. There was a bird that flew out of the roof above the traveller's head. 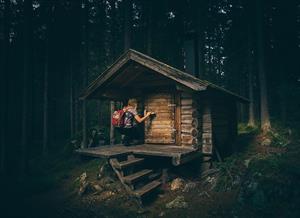 The traveller knocked on the door once again asking if there was anyone inside. Still, no one answers, and the door remains closed.
Meaning of difficult words:
Reference:
State Council of Educational Research and Training (2019). Term-1 English Standard-7. The Listeners by Walter de la Mare (pp. 42). Published by the Tamil Nadu Textbook and Educational Services Corporation.
Previous theory
Exit to the topic
Next theory
Send feedback
Did you find an error?
Send it to us!