9. Explanation of the poem "The Comet" A comet rampages through the heavans
While orbiting in space, the comet never pauses or takes a break. It moves day and night, circling the solar system throughout its life. The lifespan of a comet is shorter than stars or planets, ranging between \(1000\) and \(10,000\) years, and it keeps 'rampaging without stopping day or night'. By stating that the comet works day and night, the speaker suggests that a comet could pass through our galaxy as we speak, irrespective of the time of the day.

Witnessing a comet in the sky would be a spectacle of a lifetime, claims the speaker. On average, people on earth can expect to see a major comet every five to ten years. However, it is never easy to spot a comet. Only a fraction of our world population had had the opportunity to see a comet. Moreover, a comet that comes too close to earth can put the earth in danger. One may not even live to tell the tale, as certain comets are powerful enough to destroy most of our planet.

Nevertheless, witnessing a comet in full flight would indeed be a "spectacle of a lifetime".

A comet in full flight is a spectacle of a lifetime
In the second stanza, the speaker lists out the comet's attributes. He also compares it with two distinct entities to make the readers understand the comet's features. 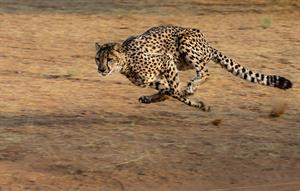 A cheetah in action
The speaker then moves on to describe the length of a comet's tail. He claims that it is "miles long". The word "miles" denotes that the tail is exceptionally long. Scientific studies prove that a comet's tail can reach \(150\) million kilometres in length. 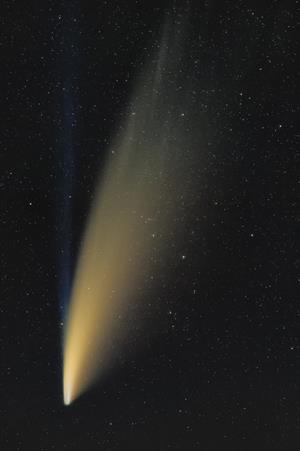 A comet's tail is miles long
Later, the speaker points out how strong and mighty a comet can be. He does so by comparing the comet to a mountain. Mountains are known for their strength and build. Hence, a comet, like a mountain, is enormous, solid, and powerful. Comets are bigger, stronger, and more powerful than mountains
In associating and comparing the comet with familiar and earthly objects such as cheetah and mountain, the speaker makes the readers familiarise themselves with the attributes of a comet. The comparisons help the readers understand the concept of a comet easier and better. From the second stanza, we have understood that a comet is extremely and unimaginably fast, big, and powerful.
In the third stanza, the speaker further explains how a tail of a comet is formed.
A comet is basically a flying ice mountain of compressed gases and dust. While travelling through space, and as it comes closer to the sun, the comet’s surface (which is made up of ice) starts melting. This causes the gases within the comet to vaporise. This also gives the otherwise rocky structure a fuzzy head (known as 'coma'). On the other hand, the radiation from the sun and the solar wind pushes out the gas and dust particles out of the comet to form a tail-like structure known as the comet's tail. As the comet travels, the tail follows.

A comet without its head and tail*
The speaker states that 'the comet leaves a trail behind it'. Here, the word "trail" can mean two things.

Firstly, one can substitute the word "trail" with the word "tail". The substances that form the tail are seen as an extension of the comet itself. It goes where the comet goes.

Secondly, the speaker might suggest that the comet leaves behind the particles as it travels. As we recall, the tail is said to be about \(150\) million km in length. Since the tail is very long, the speaker is probably trying to tell us that the length of the comet's tail makes it look like a spillage rather than an extension of the comet. In this perspective, the tail is detached from the comet, and so, when the comet moves, it leaves behind the particles, but interestingly enough, the trail doesn't follow the comet.
In the fourth stanza, the speaker looks at the dangerous side of a comet. As mentioned before, a comet that comes too close to earth can put the earth in danger, as certain comets are powerful enough to destroy our planet.

Depending on the comet’s size, a collision between the earth and comet can cause huge destruction on local to global scales.

Back to the poem, the speaker says that a comet could create earthquakes. When a comet gets closer to the earth's surface, the atmosphere will shake, and shockwaves will reach the ground, causing the earth to shake. Shockwaves cause the earthquakes
In the fifth stanza, the speaker looks at comets not as destroyers but as creators. Several scientists assert that a comet's role in creating life forms on earth was crucial.

Studies claim that the chemicals in the dust that the comets left behind could have started life on earth, eventually leading to the evolution of human beings.

According to the researches, "impacts from comets played a major role in the evolution of the earth, primarily during its early history billions of years ago. Some believe that they brought water and a variety of organic molecules to earth."*

The shock waves generated when comets collided with the early earth may have aided in generating amino acids and other essential building blocks of life. Comets, which are made up of dust, ice, and compressed gases, are also known to include tiny molecules like carbon dioxide, ammonia, and methanol, which support bacterial growth. Also, "comets may incubate and transfer microbial life from one cosmic habitat to another in the galaxy"**.

So, as the speaker pointed out, various studies prove that comets could have brought life to earth.
In the final stanza, the speaker declares that there is no greater spectacle than the sight of a comet in full flight. The stanza reinforces the central idea of the poem- the incomparable beauty of the comet.
Earlier, the speaker explained how the scientists had claimed the comets to be the creators of life. However, he doesn’t declare the speculation to be true or false.  He instead says, "I cannot say if this is true", citing that he doesn't hold the authority.

Though there are several studies and speculations on the origin of species, one cannot be too sure. Moreover, the speaker declares that he doesn't have the right because he is only a writer and not a scientist.

There could also be another reason why the speaker is unable to take a stand. The idea of comets bringing life to earth opposes the religious views of Genesis; the scientific findings and the modern views rather question the existence of God.

So, it could be that the speaker plays safe by taking a neutral stand. He presents the ideas but never enforces them on his readers, and neither is he concerned about the relationship between comets and life on earth. The scientific aspect of the comets doesn't entice him a much as the aesthetic side of it.

To the speaker, the comet remains a great spectacle-- a spectacle of a lifetime. There is no more extraordinary show than the one given by a sparkling comet on a full flight. He ends the poem with the refrain "a comet in full flight", bracing the importance of a comet's beauty. There is no better spectacle than a comet
The poem shows us that a comet could be beautiful, useful, and dangerous. Here, one cannot help but recall Yeat's famous oxymoron- 'a terrible beauty'; the comet can be both terribly dangerous and exceptionally beautiful.
Previous theory
Exit to the topic
Next theory
Send feedback
Did you find an error?
Send it to us!