I cannot say if this is true
I do not have the right,
But I know no better spectacle
Than a comet in full flight.
Explanation:
In the final stanza, the speaker declares that there is no greater spectacle than the sight of a comet in full flight. The stanza reinforces the central idea of the poem- the incomparable beauty of the comet.
Earlier, the speaker explained how the scientists had claimed the comets to be the creators of life. However, he doesn’t declare the speculation to be true or false.  He instead says, "I cannot say if this is true", citing that he doesn't hold the authority.

Though there are several studies and speculations on the origin of species, one cannot be too sure. Moreover, the speaker declares that he doesn't have the right because he is only a writer and not a scientist.

There could also be another reason why the speaker is unable to take a stand. The idea of comets bringing life to earth opposes the religious views of Genesis; the scientific findings and the modern views rather question the existence of God.

So, it could be that the speaker plays safe by taking a neutral stand. He presents the ideas but never enforces them on his readers, and neither is he concerned about the relationship between comets and life on earth. The scientific aspect of the comets doesn't entice him as much as the aesthetic side of it.

To the speaker, the comet remains a great spectacle-- a spectacle of a lifetime. There is no more extraordinary show than the one given by a sparkling comet on a full flight. He ends the poem with the refrain "a comet in full flight", bracing the importance of a comet's beauty. 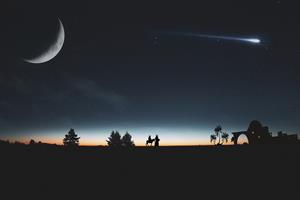 There is no better spectacle than a comet
The poem shows us that a comet could be beautiful, useful, and dangerous. Here, one cannot help but recall Yeat's famous oxymoron- 'a terrible beauty'; the comet can be both terribly dangerous and exceptionally beautiful.
Meanings of difficult words:
Reference:
State Council of Educational Research and Training (2019). Term-3 English Standard-9. The Comet- Norman Littleford (pp. 95). Published by the Tamil Nadu Textbook and Educational Services Corporation.
Previous theory
Exit to the topic
Next theory
Send feedback
Did you find an error?
Send it to us!